Skip to content
Health Ahoy may earn commissions on purchases from this page.
Historical Strongmen and Weightlifters 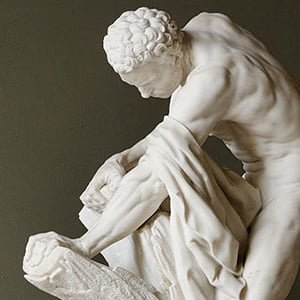 The following is a list of some of history’s most notable strongmen and weightlifters from antiquity, primarily as recorded in Greek history. This curated series includes athletes not only based on skill or extraordinary feats, but also for interesting or unusual stories surrounding their lives. Each heading clarifies whether the athlete and/or the story presented is considered factual or legendary by most historians, providing clarification as needed.

Milo of Croton is one of the most iconic historical figures among strongmen and weightlifters. He was an incredibly successful Greek wrestler, holding six Olympic victories and twenty-six titles total among the other Panhellenic festivals. He was also awarded five Periodonikēs titles, an honor given to victors of all four Panhellenic festivals (the Olympic, Isthmian, Nemean, and Pythian Games) in one Olympiad (four-year cycle). Historical records show his wrestling career began as a boy and continued for over two decades, ending in 516 BC. His hometown of Croton was renowned for producing high-level athletes, a legacy which ended with him as its capstone.

Outside of records of his victories, accounts of Milo’s life take on an exaggerated, legendary flavor. His great size and strength were often attributed to a daily diet of 20 pounds of both meat and bread, as well as the gizzard stones of roosters, all washed down with 18 pints (2.25 gallons) of wine. As a method of progressive resistance training, legend relates he carried on his shoulders a newborn calf a certain distance every day, bearing a slightly heavier load daily as it grew older. When the bull reach four years of age, Milo supposedly carried it his customary distance before slaughtering, cooking, and eating the entire thing in one day.

The legend behind his death relates that while walking in through a forest, Milo came across a tree trunk split with wedges and decided to test his strength on it. As he attempted split the trunk asunder, the wedges slipped out and trapped his hands in the crevice. Unable to defend himself, he was left victim to the wolves.

Bybon was an ancient Greek weightlifter. The Archaeological Museum of Olympia displays a 316-pound block of sandstone, dated around the 6th century BC, which reads, “Bybon, son of Phola, has lifted me over head with one hand.” Though a solely one-handed bent press with this weight seems improbable, the lift is not specified. It could be that Bybon lifted the stone with both hands and kept it held up with one alone. Either way, it is an incredibly impressive feat, especially considering the awkward size of the boulder. The short inscription on this stone is all we know historically of this ancient icon of strongmen.

Much like Bybon, Eumastas was a strongman from Ancient Greece who we know of through an inscription on a large stone. This 1,060-pound volcanic boulder, on display at the Archaeological Museum of Thera, reads, “Eumastas, son of Kritobolos, lifted me off the ground.” Though likely unrelated, this serves as an ancient precursor to competitions with European lifting stones, which would become somewhat popular sometime during the Middle Ages.

Polydamas was an Olympic athlete from the Thessalian town Skotoussa, established near Mount Olympus. He was the pankration victor in the 93rd Olympic Games in 408 BC, and was widely known for his immense strength – and his pride to match it. He was reputedly quite imposing in stature, even compared to other Olympic athletes.

The surviving legends surrounding Polydamas come from reliefs in the base of his honorary statue following the destruction of Skotoussa around 367 BC, as reported by the Greek geographer Pausanias circa 160 AD. Regarding his brute strength, one of the reliefs was said to show him assailing and restraining a large bull by its hind leg, holding his ground firmly until the bull broke away from its hoof.

He purportedly met a tragic end as he and his friends found themselves in a collapsing cave while out one day. While the rest of the group fled to avoid the falling boulders, Polydamas attempted to bear the load of the cave roof with his bare hands. His pride surpassing his strength, he was swiftly buried underneath the rubble.

Theagenes was a highly accomplished athlete from Thasos, holding an Olympic title in pygmachia (boxing) at the 76th Olympic Games in 480 BC, a title in pankration at the 77th games in 476 BC, and many other titles from the Pythian, Nemean, and Isthmian Games. He was credited with holding 1,300 titles altogether, though it’s highly likely that this number is an exaggeration. Even from a young age, Theagenes was known for his incredible strength and speed. It became a legend among the people of Thasos that Theagenes was a son of the hero-god Heracles (or Hercules), son of Zeus and an icon of strength, athletics, and masculinity.

Though not known for being the most brawny of strongmen, his widespread fame among the Greeks is attributed to a tale regarding a feat of strength at the early age of nine. The legend relates that young Theagenes noticed a statue of a god in Thasos’ city square, and, finding he liked the statue, decided to haul it home. When the deed was found out, some of the citizens of Thasos demanded his death as penalty for the crime. After deliberation, the city decided that returning the statue to its original place would serve as adequate punishment, which leaves some implications regarding the statue’s size and weight. He succeeded in restoring to it its rightful place unaided, and news of his accomplishment spread quickly.

A story from later in his life relates that an adversary of Theagenes spitefully stole a statue crafted in his honor. One night, the statue toppled onto the thief and crushed him to death. The sculpted figure was swiftly put on trail and found guilty of murder, for which it was exiled to the sandy floor of the sea – though it was later recovered.

Theagenes of Thasos is also featured on our Historical Fighters and Wreslters list for his boxing and pankration career, detailed there.

Orm Storolfsson was a viking and Icelandic strongman of monumental proportion. He is credited with a number of incredibly heavy lifts, the most notable of which was a record unbroken for a millennium. One of the historical Icelandic Sagas, written around the same period as Storolfsson’s life, relates that he had 50 men raise the mast of the Norwegian longship Ormen Lange, weighing approximately 1,433 pounds (650 kg), onto his shoulders. He took three steps with the mast before breaking his back, ending his lifting career with one of the most impressive feats of strength in history.

*While Storolfsson’s lift is feasible, some historians question the validity of this record. As such, though the legitimacy of this story is not often debated, it is not universally accepted as true.

Badang is a legendary folk hero of Malay tradition. His legend, typically set in ancient Singapore, relates that Badang was a poor slave of small stature who one day captured a demon (or genie). As reward for letting him go, the genie offered to grant Badang one wish. Badang asked for great strength to so he could more efficiently complete his chores, and the genie obliged.

With the extra time he had from completing his chores so quickly, he used his great strength to help others. For example, legend tells that when three hundred men together were unable to launch a grounded ship, Badang arrived and pushed it away from the shore with his bare hands. As word of his great strength spread, the ruler of India sent some of his own strongmen to wrestle with him (likely one of the styles of malla-yuddha). Badang defeated every one of these challengers, so the ruler sent his strongest of all as a last resort. They engaged in several contests of strength, all of which Badang won. At the final contest, Badang lifted an enormous rock overhead and threw it near the mouth of the Singapore River, securing a decisive victory.

Badang’s final contest ties in with an actual archaeological discovery in 1819. In June of that year, a group of sailors found a large stone near the mouth of Singapore River, bearing then-indecipherable inscriptions of apparent Hindu origin. The rock was broken in 1843 during the construction of Fort Fullerton, though a piece of it, called the Singapore Stone, survived, housed today in the Singapore History Museum. The mystery surrounding the rock around the time of its discovery eventually led to its attribution to Badang’s story, and as such it is likely that the boulder-throwing part of the legend wasn’t part of the story until the 19th century.