Skip to content
Health Ahoy may earn commissions on purchases from this page.
Greek Palé (Wrestling) 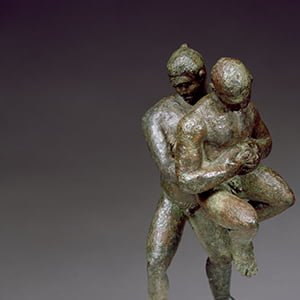 Palé was the ancient Greek form of wrestling, featured at all four of the Panhellenic festivals; the ancient Olympic Games, Isthmian Games, Pythian Games, and Nemean Games. It was the first combat sport to be added to the Olympic games and was considered the safest of the three Greek combat sports, the other two being pygmachia (boxing) and pankration.

There were two modes of the sport: orthe palé (upright wrestling) and kato palé (ground wrestling). There is some debate over the nature of these two modes and whether kata palé was typically included in competitions at all. However, historical records seem to indicate the two were separate segments of the same sport, with the two wrestlers beginning upright and taking the fight to the ground if a fall was not scored after a sweep or throw, as explained under Objective further down.

Palé was the first non-racing event to be included in the Olympic Games, added at the 18th games in 708 BC. Though this is one of its earliest record, it was likely practiced for centuries prior. (Indeed, the history of wrestling stretches as far back as 2100 BC in ancient Mesopotamia.)

As palé was featured as one of the five events of the pentathlon, this combat sport secured a second position in the ancient Olympic Games with the introduction of the pentathlon in 708 BC. In addition, since palé and the pentathlon were featured in all four of the Panhellenic festivals to some degree, palé appears to have been the most frequent competition at these games over the course of their history. In each four-year Olympiad cycle, ten individual palé competitions would be held among the four Panhellenic games, as illustrated in the table below.

The sport continued to be a featured in the Olympic Games until their abolition in 394 AD under emperor Theodosius I. In the decades following his decree, all of the Panhellenic festivals slowly died out.

To win a palé match, the athlete had to score three points on his opponent via falls and/or submissions. A fall was scored when the opponent’s back or either shoulder touched the ground, which could be achieved via a sweep or throw during the orthe palé segment, or other maneuvers during the kato palé segment. The latter was scored when the athlete forced his opponent to submit, typically through the use of wrestling holds on the upper body. This likely occurred almost exclusively during the kato palé segment. It is probable that a submission during the orthe palé phase would be accepted as a point, but it would have been difficult and rare for an athlete to secure a submission hold on his opponent while maintaining their upright positions.

As a fall could be scored during the upright orthe palé stage, the fight did not always continue to the kato palé stage on the ground. It likely that the fight only continued to that phase when a thrown opponent managed to keep his back and shoulders off the ground, or some other event occurred to cause one or both opponents to lose their footing. Disagreements among the judges regarding falls during the kato palé phase sometimes arose, as it could be difficult to tell what was happening on the ground. This would have contrasted the clear, undeniable falls from the standing orthe palé phase.

After a fall or submission (and likely a signal of confirmation from the referee), the athletes would get back up and reengage each other without a break. It is likely that the referee and/or judges had the authority to call for a short break if a dispute arose over awarding a point.

Athletes were not allowed to bite our gouge the eyes, just like in pankration and pygmachia. In addition, striking in any form (such as punching or kicking) was forbidden, as well as both grabbing the genitals and digging or gouging into soft spots on the body. Wrestling holds were limited to the upper body, and both choking and strangling were allowed. A rule against breaking fingers (a technique used by athletes like Sostratus of Sicyon) was established sometime during the 6th century BC. If any of these rules were broken, a referee would swiftly strike the offender with a rod or whip.

The two athletes would meet in the skamma (wrestling pit), touch foreheads, fasten their grips on each other, and attempt to throw each other to the ground to score a fall (orthe palé stage). As there was no time limit, the athlete here would often try to fatigue his opponent, making this phase last quite a while in some matches. Some athletes fought more aggressively for a quick throw.

If a throw didn’t successfully land a fall (ground contact with the back or shoulder), or if one or both of the athletes fell by some other means, the two would engage each other on the ground (kato palé stage), attempting to score a fall or submission from there.

There were no weight classes for palé, so men of all sizes fought together. As such, larger men with greater strength naturally dominated the sport. With the addition of boys’ palé at the 37th Olympiad in 632 BC, athletes were split into two classes by age, though size was still not taken into account.

Records indicate matches were made through roughly the same process for all three of the Greek combat sports. At tournaments, competitors would blindly draw a lot (such as a pebble or piece of clay) with a Greek letter inscribed. Each athlete would be paired with whichever other athlete drew the matching character. Were there an odd number of competitors, someone would sit that round out. One person could get lucky and sit out multiple rounds, however it was considered doubly honorable to compete in all rounds and win.

Major festivals, such as the Olympic Games, likely had four rounds with sixteen athletes. There were likely preliminary matches before major games to narrow down to that number, as records indicate some festivals had thousands of fighters vying for titles in their respective sports.