Kava is a shrub that grows in the Pacific Islands. For centuries, its roots have been ground into a powder and extracted into a bitter drink, a traditional staple among these islands.

Kava is notable for its calming, relaxing, and focusing effects. Some even consider it to be a beneficial alternative to alcohol, without the addictive qualities. 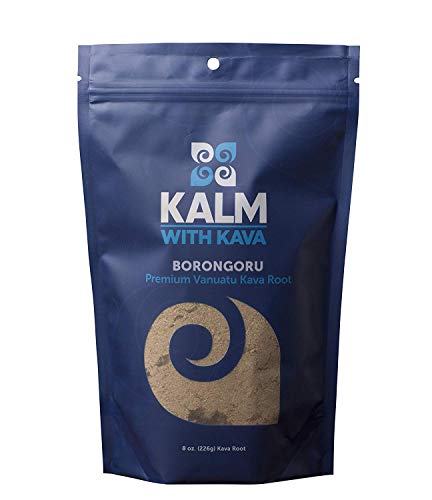 Kalm with Kava is debatably the best kava brand when it comes to popularity. Their pure Borongoru noble kava root powder is a great option for anyone with an interest in this Pacific Island root. 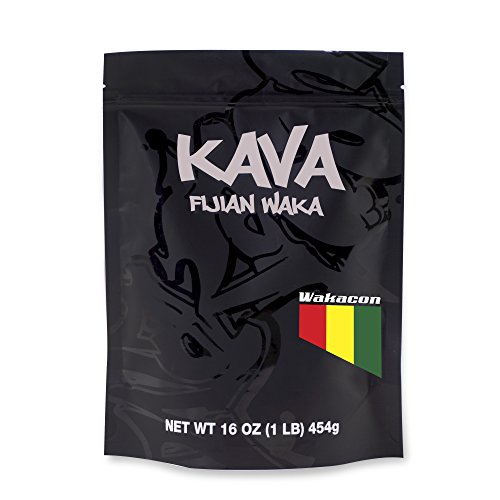 Just like Kalm’s kava powder above, this is 100% pure ground kava root powder. It’s usually brewed in warm water using a fine, sealable strainer bag to create a kava tea without the grit from the root. Cheesecloth can also work in a pinch. 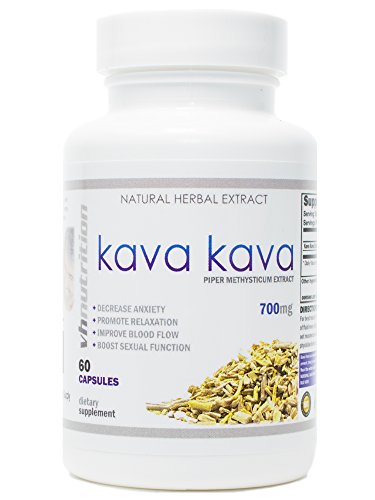 We’re not exaggerating when we say that VH Nutrition offers what appears to be the absolute best kava capsules available. In order to save money, most manufacturers of kava extract capsules use tudei kava and/or a solvent extraction process. As discussed below, both of these things are potentially harmful.

These are quite literally the only noble strain, water-extracted kava capsules we could find on Amazon. If you want a safe kava supplement, VH Nutrition has you covered. 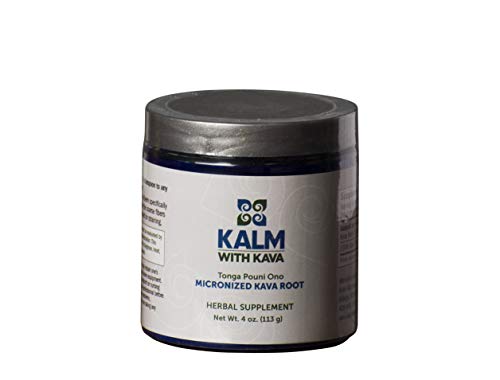 Not everybody wants to deal with the hassle and wait of steeping raw kava powder. The solution: Kalm with Kava offers this micronized kava powder that instantly mixes into liquid. This isn’t extracted kava, but rather raw kava powder that’s had the coarse fibers removed, with the remainder ground down even finer.

For easy, on-the-go kava, this micronized instant kava powder is a great option. Just mix into warm water and stir. 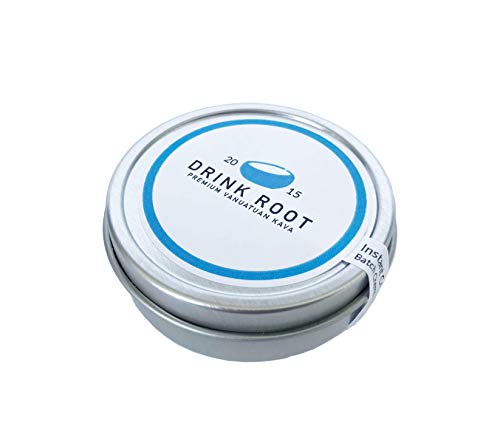 This dehydrated noble kava juice is another great option for anyone wanting some instant, convenient kava on the go. While micronized kava is simply raw kava powder with the insoluble fibers removed, this is actually a pre-steeped then dehydrated kava drink.

Simply put, while dehydrated kava juice is slightly more expensive to make, it delivers a more authentic kava drink than micronized kava powder, since the original material has been strained out. It’s also really concentrated, meaning you need much less of the dried product to make a drink. This is a great option for an easy, authentic kava drink. 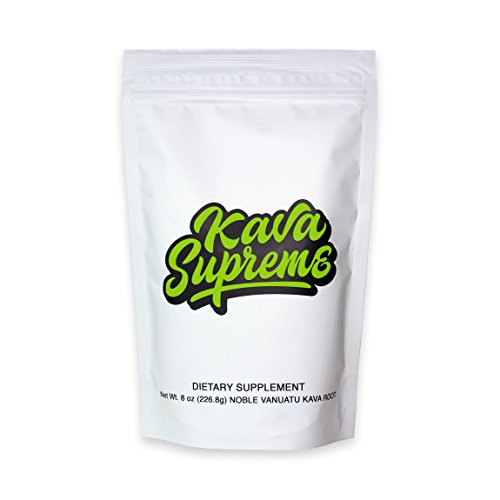 We had to give Kavafied a shout-out on our list of the best kava supplements. First off, they deliver a top-notch noble kava powder. It’s 100% raw, unextracted kava root ready for steeping.

However, Kavafied also offers a super convenient kava steeping shaker called AluBall, designed to easily make authentic kava drinks. Just put your raw kava powder in the steeping ball, give it a shake, then let it sit. Once it’s done, you can pour your freshly-brewed kava into the coconut-shell-inspired lid for a feel-good treat.

Feed your kava cravings with this easy, on-the-go, kava-steeping shaker.

As previously mentioned, kava is a Pacific Island shrub that is commonly extracted into a tea. Research has shown that kava possesses calming and anxiety-reducing effects, and may provide other health benefits. As such, it’s commonly consumed not just as a tea, but also as a health supplement.

How we pick the best kava brands:

The effects, quality, and risks of kava depend heavily on the strain and preparation of the plant. We’ve gone to great lengths to ensure that every kava supplement on this list comes from only the best kava brands. Here’s a quick run down of our requirements.

There are two primary types of kava plant: noble kava and tudei kava. Noble kava is generally understood to be the best kava strain. Here’s why:

Compared to tudei kava, noble kava plants contain preferable concentrations of certain naturally-occurring compounds. This is largely why noble kava is the traditionally preferred variety and the most widely consumed. Most notably, noble kava possesses higher levels of beneficial kavalactones.

Kavalactones are a class of chemical compounds naturally found in kava plants. They’re responsible for most of the desirable effects of kava, such as its ability to reduce anxiety symptoms.1Kava: A Comprehensive Review of Efficacy, Safety, and Psychopharmacology However, certain kavalactones have been shown to be harmful to the liver.2Kava and Kava Hepatotoxicity: Requirements for Novel Experimental, Ethnobotanical and Clinical Studies Based on a Review of the Evidence These harmful types of kavalactones can be found in higher concentrations in tudei kava.

Furthermore, tudei kava contains high levels of flavokavains, which have been shown to be harmful to liver and bladder health.3Flavokawain A, a Novel Chalcone from Kava Extract, Induces Apoptosis in Bladder Cancer Cells by Involvement of Bax Protein-Dependent and Mitochondria-Dependent Apoptotic Pathway and Suppresses Tumor Growth in Mice4Flavokawain B, the hepatotoxic constituent from kava root, induces GSH-sensitive oxidative stress through modulation of IKK/NF-kappaB and MAPK signaling pathways. Noble kava does contain flavokavains, but in trace amounts that are low enough to avoid toxicity.5German Kava Ban Lifted by Court: The Alleged Hepatotoxicity of Kava (Piper methysticum) as a Case of Ill-Defined Herbal Drug Identity, Lacking Quality Control, and Misguided Regulatory Politics.

Reports of unpleasant kava side effects, such as nausea and kava hangover, can typically be traced back to tudei kava. In fact, tudei kava gets its name from the two-day “hangover” associated with the plant’s extract.

That being said, due to its risks and inferior quality, growing tudei kava is actually illegal in some South Pacific nations.

So, if tudei kava is so much worse than noble kava, why does anyone grow it?

Simply put, tudei kava is quicker and easier to grow than noble kava. While noble kava plants take 4 to 5 years to mature, tudei kava can often be harvested in just 1 year. Since farmers can produce this undesirable strain much more easily, regulatory bodies in Pacific Island nations have to monitor and test kava material for exportation.

Noble vs. tudei kava isn’t the only consideration when it comes to kava quality. Most notably, chemical extraction processes have been shown to create harmful kava extracts.

Traditionally, kava has been prepared among Pacific Island nations by grinding the root into a paste and extracting the compounds with cold or warm water. It turns out that with regard to the quality and safety of the extraction, there really hasn’t been much room for improvement.

All that being said, every single kava product featured in this guide has been researched to ensure quality. Each one is derived only from noble kava strains. Furthermore, every product is either raw, unextracted kava powder or water-extracted kava. According to the manufacturers, no chemical extraction processes are used on any of these featured kava products.

Kava has been shown to be helpful for promoting calmness, cheerfulness, and focus. Take a look at the research-backed benefits of kava:

Research has shown that kava can be effective in reducing stress and anxiety.8The Kava Anxiety Depression Spectrum Study (KADSS): a randomized, placebo-controlled crossover trial using an aqueous extract of Piper methysticum.9Efficacy of kava-kava in the treatment of non-psychotic anxiety, following pretreatment with benzodiazepines.10Treatment of anxiety, tension and restlessness states with Kava special extract WS 1490 in general practice: a randomized placebo-controlled double-blind multicenter trial.

Since kava has a quickly noticeable calming effect, it’s easy to assume that its anxiety-reducing effects are only short-term. However, research has shown that regular supplementation of kava may be effective in reducing anxiety in the long-term.

One study found that beginning at 8 weeks of supplementation, subjects taking kava scored significantly less on anxiety scales than a control group.11Kava-kava extract WS 1490 versus placebo in anxiety disorders–a randomized placebo-controlled 25-week outpatient trial. These anxiety-reducing effects were noted through the rest of the 25-week trial. Furthermore, no adverse side effects were noted.

Another study noted a reduction in anxiety even sooner than 8 weeks.12Kava treatment in patients with anxiety. In a trial lasting only 4 weeks, 150 milligrams of kava extract daily was shown to reduce measurements of anxiety.

Early research indicates that kava may be effective in reducing symptoms of depression.

Some of the above-cited research found a correlation between kava supplementation and reduced depression symptoms.14Kava-kava extract WS 1490 versus placebo in anxiety disorders–a randomized placebo-controlled 25-week outpatient trial.15The Kava Anxiety Depression Spectrum Study (KADSS): a randomized, placebo-controlled crossover trial using an aqueous extract of Piper methysticum. However, both of these studies specifically measure anxiety-related depression. As such, the findings may not be applicable to depression at large.

Further research is needed before researchers can confidently say whether kava has a significant effect on depression in general, and not just anxiety-related depression.

Kava has been shown to improve sleep quality and reduce stress-related sleep disruptions.

The effects of kava on sleep quality are usually studied in anxiety- and stress-prone individuals. Kava has been shown to improve sleep quality in such cases.16Clinical efficacy of kava extract WS 1490 in sleep disturbances associated with anxiety disorders. Results of a multicenter, randomized, placebo-controlled, double-blind clinical trial. Studies have found a reduction in stress-induced insomnia and sleep disruptions with as little as 120 milligrams of kava daily.17Kava and Valerian in the treatment of stress‐induced insomnia

One study examined the effects of kava on the mood and cognition of healthy volunteers.20Enhanced cognitive performance and cheerful mood by standardized extracts of Piper methysticum (Kava-kava). The trial found that a 300-milligram dose of kava increased cheerfulness in all subjects. Interestingly, subjects who scored a higher baseline measurement for cheerfulness demonstrated the greatest increase in mood following kava use.

In depressed, stressed, and anxious individuals, kava has can lead to a significant improvement in mood, as discussed above.21Kava-kava extract WS 1490 versus placebo in anxiety disorders–a randomized placebo-controlled 25-week outpatient trial.22The Kava Anxiety Depression Spectrum Study (KADSS): a randomized, placebo-controlled crossover trial using an aqueous extract of Piper methysticum. This is largely related to the extract’s anti-depressant and anti-anxiety effects.

Research has shown that kava may be an effective nootropic, as it has been found to possess some cognitive-enhancing traits.

One of the above-cited studies on kava’s impact on cheerfulness also examined its effects on cognitive performance in healthy subjects.23Enhanced cognitive performance and cheerful mood by standardized extracts of Piper methysticum (Kava-kava). The study found that with 300-milligram doses, kava supplementation was associated with increased visual attention and short-term memory tasks.

While the current findings on the nootropic effects of kava are promising, more research is needed. It may be that the observed cognitive improvements are partially due to the reduction in anxiety associated with kava use.

There is currently no officially recommended kava dosage.

As a supplement, most research performed on kava has used a dosage of 120 to 300 milligrams daily. Kava dosages in that range have been shown to potentially reduce anxiety and depression, improve mood and sleep quality, and enhance cognition, as discussed above.

As a drink, kava can be brewed similarly to tea. Most manufactures recommend putting 2 to 4 tablespoons of raw kava powder into a fine, sealable strainer bag and letting it steep in warm water for at least 5 minutes, similar to its traditional preparation. Kavafied’s AluBall steeper shaker also works great for this.

Some manufacturers recommend blending 2 to 4 tablespoons of raw kava powder directly into warm water. While this might be a little easier to prepare, the end product does turn out a little gritty. This is also not the traditional way to prepare kava.

For kava extracts, micronized kava, and dehydrated kava juice, the dosages and preparations can vary significantly. Refer to the instructions on the packaging for detailed information.

As previously mentioned, research thus far has not found any significant side effects associated with noble kava supplementation within reasonable ranges. Specifically, studies using dosages of 120 to 300 milligrams daily have noted minimal to no side effects.

As such, all of the kava products featured in this guide are noble kava, not tudei kava.

Research has shown that kava may be beneficial to emotional and cognitive health. Studies have found links between kava and reduced anxiety and depression, improved mood and sleep patterns, and boosted cognition. It’s used daily by many people as a nootropic supplement and as a means to support a healthy headspace.