Skip to content
Health Ahoy may earn commissions on purchases from this page.
Agmatine: The Wonder Supplement from 1910

Agmatine: The Wonder Supplement from 1910

Agmatine, a natural neurotransmitter, has become a popular supplement for its purported antidepressant and anti-anxiety effects, as well as other health benefits.

Here, we’ve summarized the science and listed some of the surprising potential benefits of agmatine supplements.

Agmatine is a neurotransmitter—a chemical messenger across neurons.

Produced naturally in the brain, agmatine is derived from the amino acid l-arginine. Protein rich foods such as protein powders contain arginine, and therefore play a role in agmatine production.*

However, agmatine can also be supplemented orally. Since the early 2010s, it has slowly been gaining popularity as a health supplement.

Agmatine sulfate is the most popular form of this supplement. It’s inexpensive to produce and is widely available.

*Some sources echo the claim that l-arginine, and therefore most protein-rich foods, inhibit agmatine transport in the body. We’ve debunked this myth farther down.

Although agmatine was discovered way back in 1910, it wasn’t clear at the time that it existed naturally in humans. There wasn’t much interest until in 1990s, when it was discovered in the mammalian brain.1Agmatine: clinical applications after 100 years in translationAgmatine: clinical applications after 100 years in translation

Since then, the growing body of research has revealed some surprising effects of agmatine. It’s been shown to play a role in a wide variety of biological mechanisms.

Here’s a summary on some of the most notable potential benefits of agmatine.

Although human trials are still limited, research has begun to show that agmatine may help reduce symptoms of depression.2Agmatine, a potential novel therapeutic strategy for depression3Is Agmatine an Endogenous Anxiolytic/Antidepressant Agent?

Early human trials are beginning to verify that agmatine may be able to reduce symptoms of depression in humans.

One notable study examined the effects of supplementing 2 to 3 grams of agmatine daily in three subjects with major depressive disorder. During the trial, all three subjects showed complete remission of depressive symptoms.7The clinical antidepressant effect of exogenous agmatine is not reversed by parachlorophenylalanine: a pilot study

Interestingly, these antidepressant effects persisted even after simultaneously taking increasing daily doses of fenclonine during the trial. Taking fenclonine results in a drastic depletion of serotonin, the “happiness hormone.”

These findings suggest that agmatine may be effective in reducing symptoms of depression independent of serotonin levels.

In animal studies, agmatine has been shown to be effective against several types of anxiety.8Agmatine induces anxiolysis in the elevated plus maze task in adult rats

Drinking alcohol raises levels of serotonin, the “happiness hormone.” As the effects of alcohol wear off and serotonin levels drop, anxiety can set in. In fact, anxiety is a common characteristic of hangovers.

The findings cited above suggest that agmatine may be able to help with managing “hangover anxiety.”

Even more, agmatine has shown potential to be effective against stress-induced anxiety.

For example, one study found that agmatine significantly reduced symptoms of anxiety in rats a mere 30 minutes after consumption.11Is Agmatine an Endogenous Anxiolytic/Antidepressant Agent? This suggests that agmatine may be effective against both chronic and acute anxiety.

Research has shown that agmatine supplementation may protect brain cells from damage.

For example, one notable study examined the effects of agmatine against stroke in rats.12Agmatine reduces infarct area in a mouse model of transient focal cerebral ischemia and protects cultured neurons from ischemia-like injury Agmatine was administered either 30 minutes before the artificially-induced stroke, at the same time as the stroke, 2 hours afterward, or 5 hours afterward.

Furthermore, in vitro,?in test tubes or Petri dishes outside of living organisms agmatine has been shown to protect hippocampal neurons from chemical-induced damage.13Agmatine protects against cell damage induced by NMDA and glutamate in cultured hippocampal neurons The hippocampus is a major part of the brain involved in memory and learning.

As expected, then, agmatine has also been shown to protect memory and learning.

A significant number of studies have examined the protective effects of agmatine against substances that impair memory and learning in rats. With a variety of tests and dosing strategies, agmatine has demonstrated anti-amnesic effects—particularly in spacial tasks (such as mazes).14Agmatine prevents LPS-induced spatial memory impairment and hippocampal apoptosis15Agmatine protects against scopolamine-induced water maze performance impairment and hippocampal ERK and Akt inactivation16Agmatine, a metabolite of L-arginine, reverses scopolamine-induced learning and memory impairment in rats17Behavioral effects of intracerebroventricular microinfusion of agmatine in adult rats.18Behavioral effects of agmatine in naive rats are task- and delay-dependent

It’s important to note that agmatine hasn’t been shown universally improve performance across all memory and learning tasks. Rather, agmatine appears to be most effective with more difficult tasks that rely heavily on memory.

Animal and human studies have shown that agmatine has the potential to reduce chronic pain.

In several tests of chronic pain, agmatine has been shown to reduce pain thresholds in rats. Most relevant studies have focused on dysfunction of the nervous system, such as sciatic pain.19Agmatine reverses pain induced by inflammation, neuropathy, and spinal cord injury20Agmatine produces antinociception in tonic pain in mice21Effect of Agmatine on Acute and Mononeuropathic Pain22Agmatine attenuates neuropathic pain in rats: Possible mediation of nitric oxide and noradrenergic activity in the brainstem and cerebellum23Anti-hypernociceptive properties of agmatine in persistent inflammatory and neuropathic models of pain in mice

It’s important to note that most of these studies have found that agmatine does not reduce acute pain, such as touching a hot plate—only long-term pain, such as chronic inflammation.

Another significant caveat with most of these studies is that agmatine was administered via injection. So far, human studies have only used oral agmatine supplements.

However, there has been a single human study on chronic pain in which agmatine was supplemented orally.24Safety and Efficacy of Dietary Agmatine Sulfate in Lumbar Disc-associated Radiculopathy. An Open-label, Dose-escalating Study Followed by a Randomized, Double-blind, Placebo-controlled Trial. This study found that agmatine significantly reduced chronic low back pain.

While the findings thus far are promising, more research is needed to verify the potential for agmatine supplementation to reduce chronic pain.

Similarly, agmatine has also been shown to reduce opioid dependence and withdrawal in rats.27INHIBITORY EFFECT OF AGMATINE ON NALOXONE-PRECIPITATED ABSTINENCE SYNDROME IN MORPHINE DEPENDENT RATS28Agmatine: Biological role and therapeutic potentials in morphine analgesia and dependence The authors of the cited studies conclude that agmatine has potential for managing opioid withdrawal symptoms.

Other research has found that agmatine may have the potential to manage addiction to other substances, such as nicotine,29Repeated agmatine treatment attenuates nicotine sensitization in mice: Modulation by α2-adrenoceptors but further research is needed.

In animal models, agmatine has been shown to reduce blood pressure.

Although human trials are still needed, other animal studies have similarly found that agmatine may reduce blood pressure.31Hypotensive Effect of Agmatine, Arginine Metabolite, is Affected by NO Synthase32Agmatine induced NO dependent rat mesenteric artery relaxation and its impairment in salt-sensitive hypertension

There is currently no officially recommended agmatine dosage.

Human agmatine studies thus far have supplemented between 2 and 3.5 grams of agmatine daily.33Safety and Efficacy of Dietary Agmatine Sulfate in Lumbar Disc-associated Radiculopathy. An Open-label, Dose-escalating Study Followed by a Randomized, Double-blind, Placebo-controlled Trial.34The clinical antidepressant effect of exogenous agmatine is not reversed by parachlorophenylalanine: a pilot study

Some sources assert that agmatine shouldn’t be taken with protein because of competition with the amino acid l-arginine. Specifically, the claim is that agmatine and l-arginine share the same transport mechanism.

However, this claim is not supported by the scientific literature.

The only transporter shared by agmatine and l-arginine is organic cation transporter 2, or OCT2.35OCT2 and MATE1 Provide Bi-directional Agmatine Transport This transporter is responsible for moving many other substrates as well, including choline, dopamine, creatinine, and more.36ORGANIC CATION TRANSPORTER 2 (OCT2) There is no evidence that these substrates compete with each other in any impactful way.

In addition, agmatine and l-arginine each have multiple methods of transport that don’t compete with each other.

Besides OCT2, other transporters of l-arginine include CAT1, CAT2, LAT1, and 4F2hc.37L-arginine transport and nitric oxide synthesis in human endothelial progenitor cells.38The L-Arginine Transporter Solute Carrier Family 7 Member 2 Mediates the Immunopathogenesis of Attaching and Effacing Bacteria Other transporters of agmatine include OCT1, MATE1, and EMT.39OCT2 and MATE1 Provide Bi-directional Agmatine Transport40Agmatine Is Efficiently Transported by Non-Neuronal Monoamine Transporters Extraneuronal Monoamine Transporter (EMT) and Organic Cation Transporter 2 (OCT2) There are also a few transport systems that are specific to agmatine.41Agmatine: clinical applications after 100 years in translationAgmatine: clinical applications after 100 years in translation

Even more, one relevant study specifically found that l-arginine does not impact agmatine transport.42Agmatine transport into spinal nerve terminals is modulated by polyamine analogs

In summary, the evidence shows that agmatine and l-arginine don’t compete in an impactful way. There is currently no evidence to suggest that protein should be avoided for any period of time before or after taking agmatine.

The body of research thus far has not shown any adverse side effects of supplementing agmatine orally.

So far, it appears to be safe to take agmatine over a long period of time. In one small study, two subjects took 2.67 grams of agmatine daily for 5 years with no adverse effects.43Long-Term (5 Years), High Daily Dosage of Dietary Agmatine—Evidence of Safety: A Case Report 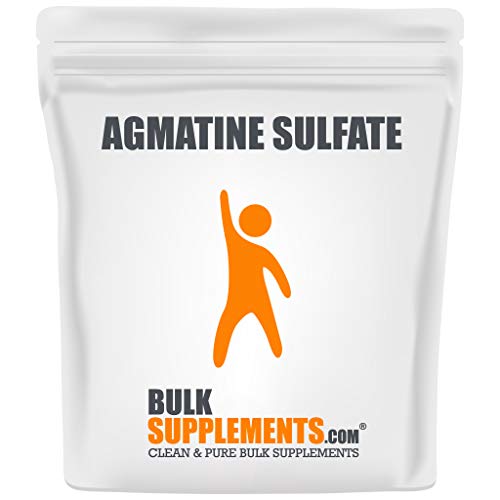 Pure powder with no filler is always going to give you the most bang for your buck. BulkSupplements’ agmatine sulfate is no exception.

Agmatine sulfate has a mildly salty and fairly bitter taste. If you find it unpleasant to mix with water or simply wash down the hatch, you can try making your own capsules with a capsule filling machine and some empty capsules. 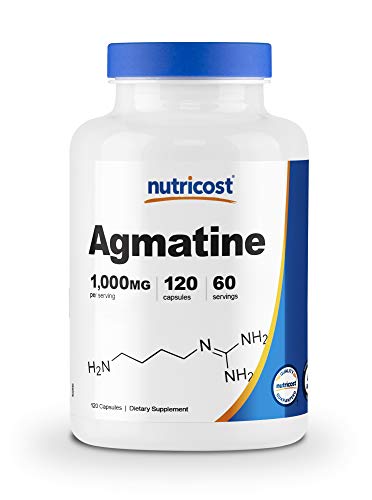 If you don’t like the taste of agmatine and don’t want to make your own capsules, this is a great alternative

When it comes to price-per-gram for capsules, Nutricost’s pure agmatine sulfate was the best deal we could find. And if you want even more of a discount, you can pick up a 2- or 3-pack.