Rhodiola rosea is an herb that grows in arctic and mountainous regions of Europe and Asia. Its roots have been used in traditional medicinal practices throughout the Nordic region, Russia, and other countries for hundreds of years.

Rhodiola extract is often taken as an adaptogenic supplement, which help the body cope with stress. We’ve laid out the 7 best rhodiola supplements to help you pick the right one for you. 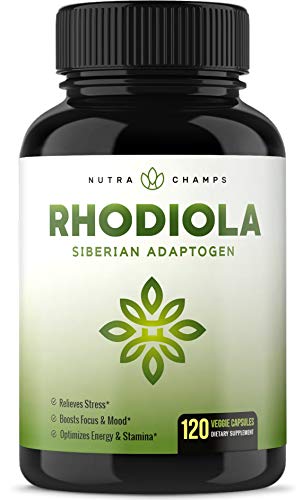 This rhodiola brand is the go-to for anyone wanting to try this fatigue-reducing herb.

Nutra Champs’ rhodiola extract capsules are one of the best rhodiola supplements you can buy. It has an industry-standard concentration of 3% rosavin and 1% salidroside, delivered in vegan-friendly gelatin capsules. It’s an easy go-to for anyone wanting to experience the numerous benefits of rhodiola extract. 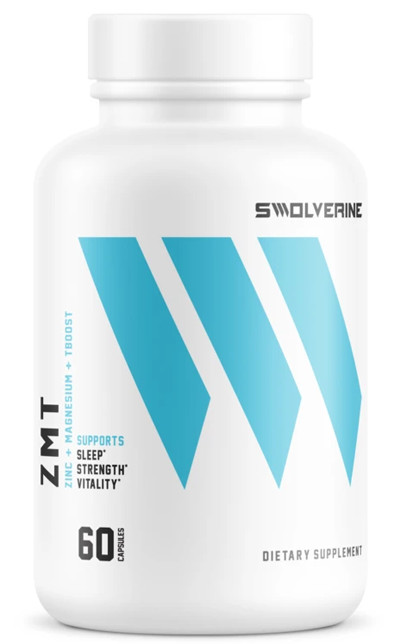 Best Price
from vendor, with coupon

*total mass of all active ingredients

This blend of adaptogenic herbs and micronutrients delivers plenty of rhodiola while diversifying your supplement regimen.

In addition to a sizable dose of rhodiola, each capsule contains fenugreek, tongkat ali, vitamin B6, magnesium, zinc, and more. Swolverine notes that these ingredients can work in tandem to support muscle protein synthesis and improve sleep quality.

You can read more about ZMT on Swolverine’s website, where they cite research demonstrating the benefits of its ingredients. 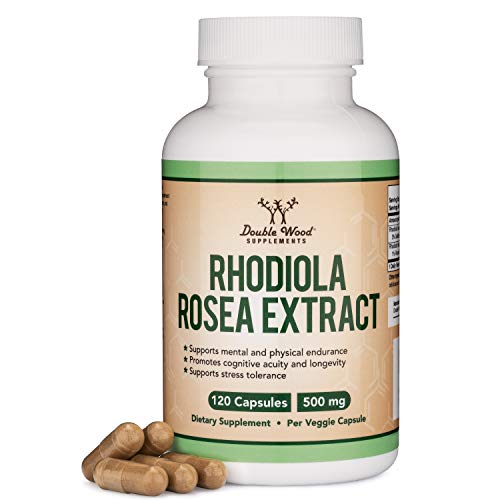 All organic, non-GMO, and USA-grown, this is the best organic rhodiola supplement.

If you’re looking for the best rhodiola supplement but want to stick with organic products, Double Wood is the brand for you. This USA-manufactured rhodiola extract is all organic and non-GMO, making it one of the cleanest rhodiola brands. It’s a great all-natural pick for this stress-relieving adaptogenic. 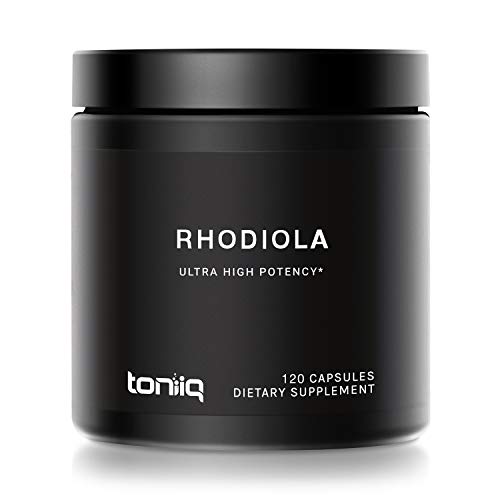 At 5% salidroside content, this is one of the most concentrated rhodiola brands.

Research on rhodiola extracts have found that salidroside content is responsible for most of the beneficial effects of the herb, as explained further down. In response, Toniiq has produced this concentrated rhodiola extract, with one of the highest levels of salidroside on the market. If you’re looking for the strongest rhodiola rosea dose, this is it. 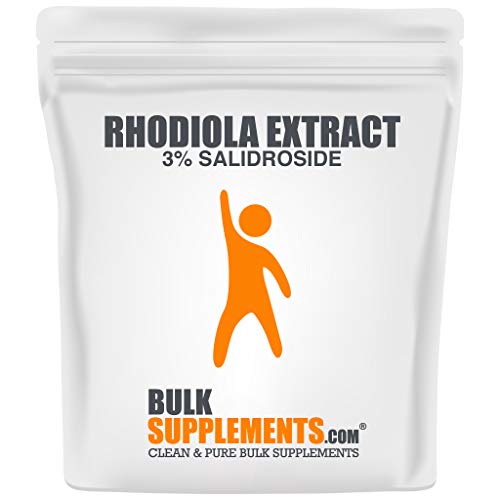 Bulk Supplements’ pure rhodiola powder is the best bang for your buck.

Buying supplements in powdered form is usually more cost-effective than pill form. This is a great pick for anyone who wants to take the powder directly or make their own capsules. At 3% salidroside content, this pure rhodiola extract powder boasts a higher salidroside dose than most other supplements.

With a capsule filling machine and empty gelatin capsules, you can make your own inexpensive rhodiola pills. We’ve linked size 0 capsules, as they’re the perfect size for roughly 500 milligrams of rhodiola powder. 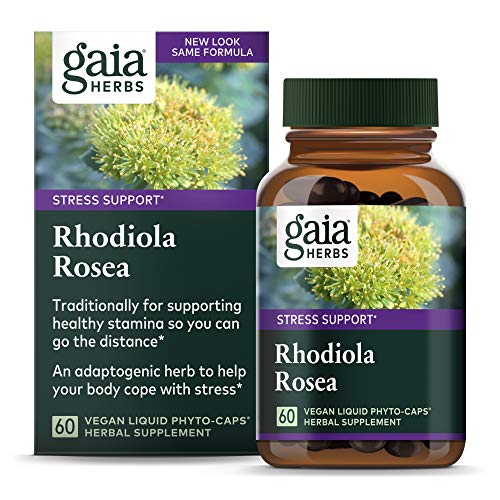 *Each capsule contains 120 mg of liquid rhodiola extract, which Gaia Herbs claims is the equivalent of 850 milligrams of dry rhodiola herb.

These rhodiola liquid extract capsules are a great choice for concentrated stress-relief.

This rhodiola supplement delivers roughly 1% salidroside and 5% rosavin content in a plant-based liquid herbal extract. Although no research has been performed on the differences between rhodiola powder and liquid extract, some users prefer liquid. You may want to try both types to figure out which you prefer. 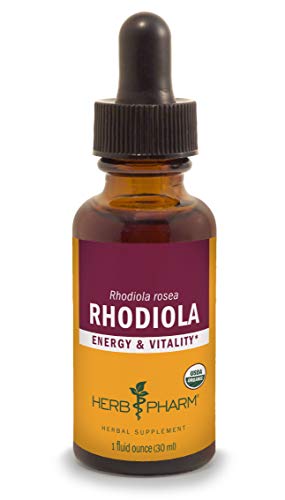 If you want economical, concentrated liquid rhodiola extract, this is a great pick.

This liquid rhodiola root extract is a great option for anyone who’s not a big fan of pills. Mix 30 to 40 drops of this rhodiola tincture into a glass of water for some easily-digestible stress relief.

Note that since this liquid extract is derived directly from rhodiola roots, it does contain standard rosavin and salidroside levels. However, as this can vary slightly from plant to plant, these percentages aren’t listed.

Rhodiola has a long history in traditional medicine throughout Europe and Asia. Research in the past several decades has come along to verify many of the claims of the mental and physical health benefits of this ancient herb. Here’s a brief overview.

One of rhodiola’s most widely-reported effects is its ability to reduce fatigue, and several studies have supported this claim.

One notable study examined the effects of 576 milligrams of rhodiola per day over 28 days.1A randomised, double-blind, placebo-controlled, parallel-group study of the standardised extract shr-5 of the roots of Rhodiola rosea in the treatment of subjects with stress-related fatigue. Over the course of the trial, subjects showed significantly reduced measurements of fatigue and burnout. Researchers also noted significantly reduced levels of cortisol, a hormone closely related to stress and anxiety and often correlating with fatigue.

In another study, subjects took 200 milligrams of rhodiola twice per day for eight weeks.2Rhodiola rosea in Subjects with Prolonged or Chronic Fatigue Symptoms: Results of an Open-Label Clinical Trial. Like most other studies on rhodiola and fatigue, there was a significant reduction in fatigue after only one week of use. Fatigue continued to decreased noticeably throughout all 8 weeks of the trial.

Quite a number of studies have found that rhodiola supplementation can help manage stress-related symptoms.

One study looked at the effects of taking 200 milligrams of rhodiola twice daily for four weeks.3Therapeutic effects and safety of Rhodiola rosea extract WS® 1375 in subjects with life-stress symptoms–results of an open-label study. As early as three days into treatment, subjects reported continually-decreasing stress-related symptoms. These improvements increased throughout the four-week trial.

And this stress-reducing property doesn’t appear to stop at four weeks. A twelve-week study of the effects of 400 milligrams of rhodiola daily similarly found a significant reduction in stress symptoms as early as one week.4Multicenter, open-label, exploratory clinical trial with Rhodiola rosea extract in patients suffering from burnout symptoms Like the other study, these improvements continued to increase through all twelve weeks of the trial.

In one notable study, subjects taking rhodiola supplements reported significantly improved quality of life.5A randomised, double-blind, placebo-controlled, parallel-group study of the standardised extract shr-5 of the roots of Rhodiola rosea in the treatment of subjects with stress-related fatigue. This is likely a secondary effect related to the effects of reduced stress and fatigue. Regardless of the specific cause, though, this is a tremendously desirable benefit.

Rhodiola and the Brain

Many people take rhodiola for its effects on the brain and mental health. Here are a few of the brain-specific beneficial effects of this ancient root.

One study of rhodiola extract looked into its effects on stressed students during examinations.6A double-blind, placebo-controlled pilot study of the stimulating and adaptogenic effect of Rhodiola rosea SHR-5 extract on the fatigue of students caused by stress during an examination period with a repeated low-dose regimen. Supplementation of the extract was associated with significantly reduced mental fatigue, as well as improved motoric response. Put simply, subjects were sharper and could react more quickly.

Another study examined the effects of rhodiola on the mental performance of night shift workers.7Rhodiola rosea in stress induced fatigue–a double blind cross-over study of a standardized extract SHR-5 with a repeated low-dose regimen on the mental performance of healthy physicians during night duty. In a two-week trial, subjects who took the supplement demonstrated improved cognitive function, including associative thinking, short-term memory, and concentration. These all play roles in a person’s ability to focus and to think creatively.

Several studies have found that rhodiola can help reduce depression symptoms.8Panax ginseng, Rhodiola rosea and Schisandra chinensis. This is likely related to the aforementioned anxiety- and stress-reducing effects of the herb, though the depression-specific effects are notable.

Another notable study compared the antidepressant effects of rhodiola rosea against sertraline, a serotonin reuptake inhibitor used to treat depression.10Rhodiola rosea versus sertraline for major depressive disorder: A randomized placebo-controlled trial Throughout the twelve-week trial, rhodiola was shown to reduce symptoms of depression. Although its antidepressant effects weren’t as strong as sertraline’s, rhodiola did produce fewer undesirable side effects.

Although ashwagandha is the better-known herbal athletic supplement, rhodiola is a contender for performance improvement as well. Here’s some of the research.

A number of studies have demonstrated that rhodiola can reduce muscle fatigue during endurance exercise. The result is that endurance athletes can perform for a longer period of time and/or at a higher intensity.

Other research further suggests that rhodiola’s performance improvement effects are at least partly the result of decreased perception of effort. One study measured energy expenditure and utilization of carbohydrates and fats during exercise after taking rhodiola.13The Effect of Acute Rhodiola rosea Ingestion on Exercise Heart Rate, Substrate Utilisation, Mood State, and Perceptions of Exertion, Arousal, and Pleasure/Displeasure in Active Men The study found that although performance improved, energy expenditure didn’t increase, which further supports the above theory.

All of this suggests that the weight loss noted in the previously mentioned study was likely a result of the bitter orange extract and not rhodiola rosea.

However, rhodiola may indirectly help with weight loss.

As mentioned above, several studies have demonstrated that this supplement can help improve endurance exercise performance. This means that by taking rhodiola before working out, someone performing endurance exercise to lose weight will be able to do so longer than they would have been able to otherwise.

Rhodiola brands will typically disclose the concentration of rosavin and salidroside in their supplements. Though knowing these numbers isn’t crucial, they can be helpful if you’re taking rhodiola rosea for specific benefits.

Some Effects of Salidroside:

How to Take Rhodiola

A dosage of 400 to 650 milligrams of rhodiola extract daily is what most users choose.

There is currently no research to suggest that taking a dosage of more than roughly 650 milligrams of rhodiola daily will have any measurable increase in beneficial effects. As such, it is advisable not to take much more than that in order to avoid unpleasant side effects.

There is currently no research to suggest that rhodiola rosea has any major side effects when supplemented within the dosage range recommended above. No research has been performed on the effects of significantly high doses of rhodiola, either.

Mild side effects at higher doses may include upset stomach, diarrhea, headaches, dizziness, and difficulty sleeping. If you experience any unpleasant side effects that don’t subside after a few days, consider lowering your dosage.

There is currently no research to suggest there is a best time of day to take rhodiola supplements.

Research has shown that the majority of the benefits of rhodiola supplements are sustained after roughly a week of use. As most of these are not short-term effects, that means that for most uses, it doesn’t matter what time of day you take rhodiola.

However, some of the above cited research suggests that rhodiola’s endurance-boosting effects may be more acute. This would suggest that taking rhodiola before endurance exercise may be beneficial for boosting performance. If you perform endurance exercise and take rhodiola daily, it may be best to take it shortly before your workout.

Many people like to supplement rhodiola alongside ashwagandha, an ancient medicinal herb from India. Here’s a quick rundown on the differences between rhodiola and ashwagandha, as well as how they complement each other.

This information is summarized from this guide and our complete ashwagandha guide.

Featured in our complete ashwagandha guide, Physician’s Choice’s ashwagandha root extract is a great option for anyone looking to experience the mental and physical health benefits of this ancient Indian herb. 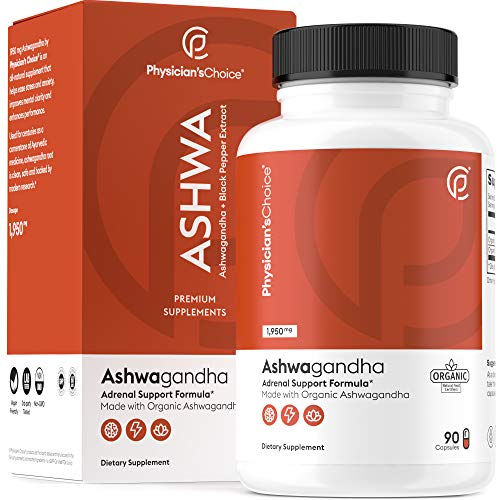 Research has shown that supplementing rhodiola can be a great strategy for managing fatigue, stress, depression, and mental performance. It’s an excellent adaptogen and nootropic supplement often taken alongside ashwagandha.