Skip to content
Health Ahoy may earn commissions on purchases from this page.
Historical Fighters and Wrestlers 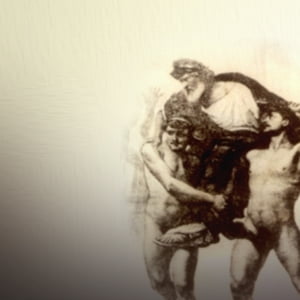 The following is a list of some of history’s most notable fighters and wrestlers from antiquity, primarily as recorded in Greek history. This curated series includes athletes not only based on skill or extraordinary feats, but also for interesting or unusual events surrounding their lives. Each heading clarifies whether the athlete and/or the story presented is considered factual or legendary by most historians, providing clarification as needed.

Arrhichion of Phigalia was a Greek Olympic victor in pankration (a violent combat sport), who died immediately after winning his third consecutive Olympic title at the 54th Olympic Games in 564 BC. The geographer Pausanias (2nd century AD) and sophist Philostratus the Younger (3rd century AD) both provide later accounts of this fight.

As the story of this match was likely passed down through spoken tradition, it takes on some variation between the two sources, though the primary details remain the same. Arrhichion’s unnamed opponent locked his legs around the former’s waist and fastened a hold on his neck, squeezing both in an attempt to get Arrhichion to submit. However, Arrhichion would not concede, and continued to fight back as his opponent suffocated him. He was able to inflict an injury on his opponent’s foot severe enough to cause the man to release and surrender, though Arrhichion remained unmoving on the ground. Upon examination, it was clear that he had suffocated to death. As his opponent had submitted, Arrhichion’s corpse was declared pankration victor of the 54th Olympic Games, making him the only Olympic athlete to win a title post-mortem.

Theagenes of Thasos was one of the most highly accomplished fighters in Greek history, holding an Olympic title in pygmachia (boxing) in the 76th games in 480 BC, a title in pankration at the 77th games in 476 BC, and many other titles from the other Panhellenic games (the Pythian, Nemean, and Isthmian Games). He was credited with holding 1,300 titles altogether, though it is highly likely this number is an exaggeration. Even from a young age, Theagenes was known for his incredible strength and speed. It became a legend among the people of Thasos that Theagenes was a son of the hero-god Heracles (or Hercules), son of Zeus and symbol of strength, athletics, and masculinity.

Historical records don’t provide specifics regarding his pygmachia and pankration fighting styles, but he was highly regarded by the Greeks as one of the greatest athletes and fighters to ever live. The majority of his titles were in boxing, but his small collection of pankration titles attest to his diversity in skill. It is unknown whether he participated in palé (wrestling).

A story from later in his life relates that an adversary of Theagenes spitefully stole a statue made in the latter’s image, and by inference, kept it hidden in his own home. One night, the statue toppled onto the thief and crushed him to death. The sculpted figure was supposedly put on trail and found guilty of murder, for which it was exiled to the sandy floor of the sea – though it was later recovered.

Theagenes of Thasos is also featured on our Historical Strongmen and Weighlifters list for a legend regarding a feat of strength from his childhood, detailed there.

Diagoras of Rhodes was a very successful Olympic boxer who was considered by the Greeks to have died the happiest man to ever live. He won the pygmachia (boxing) title at the 80th Olympic Games in 464 BC, as well as at least seven other titles among the Pythian, Nemean, and Isthmian Games combined.

All three of Diagoras’ sons were very successful fighters, earning Olympic titles in their respective combat sports (though he did not live to see his youngest son’s career come to fruition). In 448 BC, Diagoras died shortly after his sons Damagetos and Akousílaos won the pankration and pygmachia titles, respectively.

It was considered one of the highest honors in ancient Greek culture for a man of high glory to have is own feats surpassed by even one child, let alone two. This euphoria experienced by Diagoras would have been compounded by the religious reverence and prestige surrounding the Olympic Games. After his sons won their respective matches in 448 BC, they hoisted their father to their shoulders and paraded him around the stadium. The Greeks held that in this moment, Diagoras had achieved the ultimate pinnacle of happiness any mortal could ever experience. Having reached the highest point of his life, he reportedly died of happiness on the spot,

*While the story of Diagoras’ death may seem farfetched, it appears he may have suffered a heart attack. Takotsubo syndrome (TTS), sometimes called broken-heart syndrome, is a stress-related heart condition trigged by extreme emotional states, occasionally leading to heart failure. In a minority of cases, TTS is linked with instances of extreme joy, such as weddings, surprise parties, or sports victories. Based on historical accounts and context, it is quite possible that Diagoras’ extreme emotional high triggered TTS or something similar, which could have swiftly led to heart failure.

Sostratus of Sicyon was a Greek Olympic pankratiast infamously known for bending and breaking his opponents’ fingers during matches. He held three consecutive pankration titles at the 104th to 106th Olympic Games (364 BC to 356 BC), and fourteen other titles at the Pythian, Nemean, and Isthmian Games combined.

Dioxippus was a Greek pankratiast whose skill in the sport lent him widespread fearful respect. He was reputedly so formidable that he won the pankration title at the 111th Olympic Games in 336 BC by default when nobody dared to compete against him.

Later in his life, while attending a banquet hosted by Alexander the Great (356–323 BC), Dioxippus was challenged by a drunken Macedonian soldier by the name of Coragus, who was held in high regard among his piers. Though he was now retired from fighting, Dioxippus accepted the challenge at the behest of the king and the excitement of the Macedonian camp. On the day of the fight, Dioxippus arrived completely nude in Greek athletic fashion, carrying a purple robe in hand and armed only with a club. Coragus arrived in full armor, bearing a shield and pike with his left arm, a lance in his right, and a sword on his side. When the match started, Dioxippus dodged the thrown lance, shattered the readied pike with his own club, and trapped Coragus in a bear hug, swiftly taking him to the ground and discarding his sword. Dioxippus then placed his heel on his defeated opponent’s throat, a position from which he could kill, before Alexander called an end to the bout.

Later, the bitter Macedonian camp framed Dioxippus for the theft of a golden cup in an attempt to dishonor him. After writing to Alexander concerning the false accusation, he decided to end his shame with an honor suicide, falling on his own sword.

Kleitomachos of Thebes was the only Greek athlete besides Theagenes of Thasos to win titles in all three combat events (pygmachia, palé, and pankration) at one festival, in this case all in one day at the Isthmian Games in 216 BC. In addition to this feat, he held the boxing and pankration titles at the 141st Olympic Games in 216 BC and three pankration titles from the Pythian Games, earning him a reputation as one of Greece’s greatest fighters. The Roman author Aelian (175–235 AD) provides insight into Kleitomachos’ character, telling us he was a stoic man, practicing temperance and moderation in all things, even to the point of abstaining from sex.

Melankomas was the Greek victor in pygmachia (boxing) at the 207th Olympic Games in 49 AD. The Greek writer Dio Chrysostom (40–115 AD) reported that Melankomas would never throw a punch in his fights, but rather dodge all of his opponent’s blows until they succumbed to fatigue. Dio claimed the athlete never once lost a match or even received a blow from an opponent. While Melankomas was likely a real person, Dio’s claims regarding his fighting style and record are suspect.

Varazdat was a Persian king of Armenia under Roman rule. Sometime before his reign in 374 BC, he competed in the Olympic Games and won a title in pygmachia, though it is unclear during which year. This timing makes him one of the last fighters in the ancient Olympic Games before their suppression in 394 AD under order of emperor Theodosius I.

Horus was an Egyptian athlete and philosopher who participated in the Olympic Games at Antioch in 364 AD and won an unspecified title. Records seem to indicate he won one of the combative sports – most likely pygmachia. Like Varazdat, Horus was among the last age of athletes to compete in the ancient Olympic Games before their end in 394 AD, and one of the few non-Greek athletes to win a title.