Skip to content
Health Ahoy may earn commissions on purchases from this page.
Historical Runners 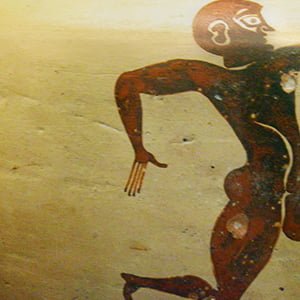 The following is a list of some of history’s most notable runners and racers from antiquity, primarily as recorded in Greek history. This curated series includes athletes not only based on skill or extraordinary feats, but also for interesting or unusual stories surround their lives. Each heading clarifies whether the athlete and/or the story presented is considered factual or legendary by most historians, providing clarification as needed.

Coroebus of Elis was the victor of the only event at the first recorded Olympic Games in 776 BC, the stadion, making him the first known Olympic champion ever. Though highly honored for his accomplishment, he appears to have maintained a lowly career as a baker and cook both before and after his Olympic victory. It is unclear whether he continued to compete in other races after his victory.

Oebotas of Dyme was the winner of the 6th Olympic festival in 756 BC, and the first victor from Achaea. After his victory, a statue crafted in his honor was erected in Olympia. From then on, it became customary for athletes from Achaea to make an offering to him there before the Olympics, later laying a wreath at his feet if they returned victorious.

Chionis of Sparta is credited with being the first athlete to win both the stadion and diaulos events (both sprinting footraces) at three consecutive Olympic Games, the 29th to 31st games from 664 to 656 BC. He held this record until 480 BC, when Astylos of Croton not only completed the same feat, but also won the hoplitodromos, a race in which the runners wear pieces of hoplite armor. In competitive spirit, the Spartans then amended Chionis’ memorial inscription to clarify that there was no such event during his life.

Chionis was also an accomplished long jumper (part of the pentathlon), setting a record for the sport at the 31st Olympic Games in 656 BC.

Pheidippides is perhaps one of the most influential figures for modern day runners. He was an Athenian courier and purportedly the formative figure behind the origins of the Marathon race. As legend relates, Pheidippides was sent from Athens to request aide from Sparta when the Persians attacked Marathon in 490 BC, which required the courier to run about 150 miles in a day and a half. After their victory over the Persians, Pheidippides ran ahead from Marathon to Athens (about another 26 miles) to announce the good news, after which he reportedly collapsed and died.

While it is likely Pheidippides was a real person, the romanticized story behind this first Marathon run is almost certainly only a legend.

Astylos of Croton is the only recorded Olympic athlete to have met Chionis of Sparta’s record of three consecutive Olympic victories in both the diaulos and stadion from 488 to 480 BC, and surpassed this record by also winning the hoplitodromos. Despite his achievements, he was dishonored in his hometown for accepting a bribe from officials in Syracuse, Sicily to compete as a Syracusan citizen in the final two games. As a result, he was banished from Croton, his commemorative statue was demolished, and his home was turned into a prison.

Philinus of Cos – 3rd Century BC
Factual

Philinus was an accomplished athlete from Cos, a small island east of Olympia. He held five Olympic titles in the diaulos and stadion combined, the first of which he won at he 128th Olympic Games in 268 BC at the early age of fourteen. In addition to his Olympic victories, he also held nineteen other titles combined from the Pythian, Nemean, and Isthmian Games.

Apollodorus was a first-century athlete and Olympic victor from Macedonia, though not specifically known for his impressive feats like some of the other Greek runners listed. Little is known of him beside the fact that he was struck and killed by lightning on his journey home from his victory at one of the Olympic Games, making him a rival with Diagoras of Rhodes for the title of most interesting death. Antipater of Thessalonica, a first-century writer and governor of his city, wrote the following grisly epitaph concerning Apollodorus:

“You know Cyllene the Arcadian mountain;
That is the monument that covers Apollodorus.
As he returned from Pisa by night
a thunder from Zeus killed him.
Long away from Aiane and Beroia,
beaten by Zeus the runner sleeps.”

Mosshammer, A. A. (1979). The Chronicle of Eusebius and Greek chronographic tradition. Lewisburg: Bucknell University Press.