Skip to content
Health Ahoy may earn commissions on purchases from this page.
Greek Hoplitodromos (Race) 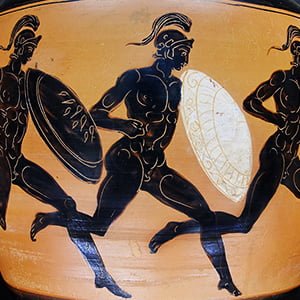 The hoplitodromos was an ancient Greek encumbered race held at three of the four Panhellenic festivals; the ancient Olympic Games, Pythian Games, and Nemean Games. Competitors had to wear pieces of hoplite armor – a helmet, shield, and (until the 5th century BC) greaves – and sprint typically two lengths of the stadion track. As the combined weight of the pieces of armor could weigh over 50 pounds, this was a strenuous test of muscular strength.

The hoplitodromos was added to the ancient Olympic Games in 520 BC, 200 years after its predecessor the dolichos. It was the last of the four footraces to be added to the games, the other two being the stadion and diaulos.

At the time of its institution, competitors wore a helmet, shield, and greaves. However, in the mid-5th century BC, the greaves were abandoned, more likely due to their impedance in leg movement than due to the extra weight they contributed. Because of this early elimination, most ancient depictions of the race show athletes with only the shield and helmet.

The hoplitodromos continued to be a featured in the Olympic Games until their abolition in 394 AD under emperor Theodosius I. In the decades following his decree, all of the Panhellenic festivals slowly died out.

The hoplitodromos took place on the stadion track within the stadium. The length of track was defined as 600 Greek feet (pous), though since this unit was not standardized, the stadion could vary in length by up to 150 feet. Measurements at archaeological sites vary in length from 177 m (581 feet) in length at Delphi to 225 m (738 feet) at Aphrodisias.

The number of laps in the hoplitodromos varied among the Panhellenic Games. Typically, the athletes had to run 2 lengths of the stadion – to the end and back. At Nemea, however, the distance was 4 stadia, and at Platea it was 15. The latter would noticeably change the dynamics of the race, making it more of a test of muscular endurance rather than acute strength.

The athletes would line up at the beginning of the track wearing the appropriate pieces of armor, though nude and barefoot besides, and take off at the signal of a nearby judge. They would run back and forth on the stadion to complete the required distance, looping around a pole called a kampter at the finish line each lap. (It is unclear whether each competitor had his own kampter to loop around or if all competitors looped around the same kampter.) The first runner to complete the required number of laps won the competition.