Skip to content
Health Ahoy may earn commissions on purchases from this page.
History of Wrestling 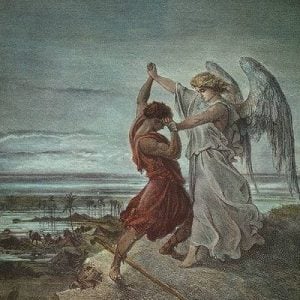 The history of wrestling boasts an incredible span of over 4,000 years. The sport reaches far back into antiquity, taking hold of cultures across the globe throughout the ages. It is perhaps one of the most widely practiced sports in history, leaving a slew of artifacts, documents, and legends in its wake.

Wrestling, in its numerous forms, appears to have been quite popular with many societies in the Eastern Hemisphere. Evidence of its practice can be easily found throughout ancient Asia, India, and Mesopotamia, and again in medieval Europe. Some of these sports may discounted on semantics (for example, arguing that the medieval German sport geselliges ringen is not wrestling, but grappling); however, this article defines wrestling loosely, examining all combat sports that could arguably be categorized as such.

Ancient Chinese culture hosted a small collection of wrestling sports, such as jiao di and its cousin jiao li. The former appears to have been a competitive wrestling or grappling sport, while the latter was a martial art with apparent elements of grappling. Evidence of such sports is apparent in archaeological findings of lei tai (raised fighting platforms), the earliest of which has been dated back to the Qin Dynasty (221–206 BC). These platforms were often used for king-of-the-ring style competitions, in which two competitors would try to push each other off the edge. These sports may be the earliest examples of this style of wrestling.

Sumo is likely one of the first sports to come to mind in a study of the history of wrestling. Claims regarding the sport’s history are controversial, as many sources cite legends of sumo’s practice that stretch back beyond a thousand years ago. This has come about, in part, due to a dual-history nature of the sport – that is, two separate practices with two separate histories that were combined together, creating an confusing picture of the history of sumo.

The sumo wrestling we are familiar with developed around the late 18th century. At the time, sechie sumo more closely resembled grappling or a form of martial arts (indeed, sechie sumo had developed out of another martial art, likely jujutsu, within the prior 200 years), wherein the goal was to throw the opponent to the ground. The sport was perhaps comparable to street fighting, and was not favorably looked upon by Japanese officials. Yoshida Zenzaemon, an 18th century sumo referee, adapted much of the sport to match traditions of the Shinto religion in an effort to evolve it into an official cultural practice. To aid this, he crafted a verifiably false history of the sport that tied into traditional Shinto practices, appealing to a desire to maintain a supposed cultural heritage.

Largely due to Zenzaemon’s efforts, the history of sumo wrestling is often mistakenly thought to extend much earlier than the 18th century. Despite these inaccurate legends, sumo nonetheless serves as a clear example of wrestling in Japanese history.

The Epic of Giglamesh (c. 2100 BC), one of mankind’s earliest surviving pieces of literature, provides what is perhaps the earliest literary reference in the history of wrestling, let alone any sport in history. In an early section of this Mesopotamian epic, the godlike king Gilgamesh wrestles the wild man Enkidu, smashing doorposts and shaking walls in the wake. The story relates that Gilgamesh throws his opponent and wins the struggle, which would suggest that at least one form of wrestling in this region focused on throws as opposed to pins or holds. This brief section of this story provides the earliest historical glimpse at combat sports in the region.

The biblical book of Genesis, though difficult to date,* contains a similar allusion to wrestling. Almost as an aside, Genesis 32:24 and following tells of the Israeli patriarch Jacob wrestling with an angel (disguised as man) until daybreak. Despite having his hip removed from his socket, Jacob apparently prevails and maintains some sort of hold on the angel, who requests to be let go. This would suggest that unlike the wrestling depicted in the Epic of Gilgamesh, this style focused on holds. However, it should be noted that this biblical depiction of wrestling may not accurately reflect competitive wrestling in Mesopotamia, as Jacob does not initially yield at the angel’s request. Were this merely a competition, it would be expected that Jacob would release his opponent upon his victory.

*Scholars debate the date of Genesis’ composition. The generally accepted dates range from the 10th to 5th centuries BC, and the earliest discovered manuscripts with portions of Genesis date to the 2nd century BC.

Ancient Egypt hosts perhaps the earliest pictographic evidence of wrestlings sports, dated around the same period as the Epic of Gilgamesh. Wall paintings of wrestlers at the Beni Hasan tombs, shown below, date back to at least 2000 BC, suggesting ancient Egyptians during this period engaged in competitive wrestling. These figures demonstrate a number of pins and holds, though they don’t completely reveal the criteria for winning a match. Beyond illustrations such as these, little is known of the history of wrestling in ancient Egypt, as the sport doesn’t appear to be recorded in extant papyrus manuscripts.

Wrestling in ancient Greece (called palé) was much better documented than the above Mesopotamian sports, and is typically a central figure in discussions of the history of wrestling. It was a very popular spectator sport and held a prominent place in the ancient Olympic Games from 708 BC and other Panhellenic festivals later on.

To begin a match, the two opponents would meet in the middle of the skamma (wrestling pit) and lean into each other with their foreheads touching. The goal was to throw the opponent, landing them on their back and/or shoulders in order to score a fall. Submissions and holds that judges deemed to be inescapable were also counted as a fall. The first to score three falls won the match. The sport was considered fairly intellectual, as excellent technique and agility were vital for all but the strongest competitors. Because of this, successful wrestlers in ancient Greece were considered highly intelligent, perhaps in contrast with common opinion of wrestlers today. As there were no weight classes, smaller contestants had to rely on skill over strength to overcome their larger piers, though the latter nevertheless dominated the sport.

India’s history of wrestling reaches back almost as far as some of the above; evidence of the sport can be traced back as early as 500 BC. Malla-yuddha (which translated from Sanskrit means “wrestling combat”) was a popular combat sport that involved grappling, holds, striking, and sometimes even biting. While not strictly a wrestling sport, certain styles of malla–yuddha would likely be qualified as wrestling. It was separated into four forms, each progressively more violent, with the lower forms being more aligned with competitive wrestling. Its fourth form consisted of ferocious, full contact striking and sometimes limb-breaking holds, perhaps comparable to the brutal Greek combat sport pankration.

In the 16th century, a wide variety of regional forms of wrestling and grappling were practiced among all classes throughout Europe. One of the most popular of these in Germany was geselliges ringen, a relatively safe combat sport with elements of wrestling and grappling. The goal was to throw the opponent or get them to submit, but as ringen was a general style of self-defense and combat rather than a specific sport, local variations developed. This allowed for local matches with some similarities to wrestling.

Coraíocht, commonly referred to as “collar and elbow,” is one of Ireland’s most internationally influential traditions and a vital piece of the history of wrestling. This grappling sport may have been practiced as early as the 7th century BC in the Tailteann Games, though the majority of extant sources cite the sport around the 17th century AD. In this sport, the competitors would grab each other’s collar with the right hand and elbow with the left (thus the colloquial name) and attempt to take each other to the ground. This ended up being one of the most popular combat sports in North America, brought over with Irish immigrants during the 18th century.

“Collar and elbow” may have been one of the most popular styles in the early history of the United States, but it wasn’t the first in North America. Other styles of wrestling and grappling had been brought over by earlier colonial settlers from Europe prior to the establishment of the United States, and even found some level of popularity among Native American tribes. However, it appears these early styles weren’t as readily adopted as coraíocht, which spread rapidly upon its introduction to the United States.

Salamone, F. A. (2015). The Native American identity in sports: Creating and preserving a culture. Rowman & Littlefield.