Skip to content
Health Ahoy may earn commissions on purchases from this page.
German Ringen (Grappling) 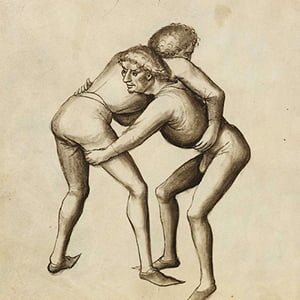 The German term Ringen refers to several forms of grappling, including a sport called Geselliges Ringen and a form of unarmed combat called Kampfringen, both of which use some of the same techniques. All originating in medieval Germany, these Ringen sports came in an assortment of flavors, varying in style, setting, popularity, and purpose.

Geselliges Ringen was a purely recreational sport enjoyed among all classes. It was a fairly safe form of grappling, with rules in place to mitigate serious injury (such as rules restricting punches or joint locks). The goal of this form of Ringen was typically to throw the opponent, forcing them to contact the ground with their back or any other body part except the feet.

Kampfringen, which translates to “combat grappling/wrestling,” was not purely a sport, but rather a style of combat and self defense meant to incapacitate the opposition. It incorporated punches, kicks, chokes, holds, and joint breaks. Though Kampfringen could be practiced in a sportive context, it was much more dangerous than its Geselliges cousin. The absence of many restrictions in this combat sport is reminiscent of the Greek sport pankration.

Other Ringen sports included Ringen am Shwert, which involved using grappling techniques during swordplay, and Ringen zu Ross, which consisted of grappling while on horseback.

The earliest literary references to Ringen lie in the very early 15th century AD, so it is safe to say its origins likely lie in the 14th century. With so many varieties of sportive and combative Ringen being practiced in Germany throughout the Middle Ages, it can be difficult to identify the different histories of its specific branches. Geselliges Ringen‘s popularity appears to have peaked in the 16th century, though other branches of the sport have remained in practice at some level to this day.

The objective of Geselliges Ringen was likely to throw the opponent. Illustrations depict opponents in a standing position, so it is unlikely any ground wrestling was involved in the most popular variations of the sport. As such, it is likely that contact to the ground with the back or possibly any part of the body excluding the feet would have counted as a throw.

Because sportive Kampfringen was not nearly as popular as Geselliges Ringen, it is not very well documented, so the objective in such a setting is unclear. Seeing as strikes, holds, and chokes were allowed, it is unlikely the goal was to score a throw. It is more probable that the objective was to get a submission or to fight until one opponent couldn’t continue, though this is speculation.

While Kampfringen, being a form of actual combat, likely didn’t have many restrictions outside of biting and eye gouging, Geselliges Ringen did. Just like within most forms of grappling, opponents could not use strikes, chokes, joint breaks, or the like. As no standardized system was in place to enforce these rules, violators were likely called out by spectators or a judge.

*Self defense illustrations of Kampfringen do sometimes depict opponents on the ground. However, as the same illustrations also depict breaking the opponent’s neck and other bodily mutilations, it is safe to say they are not depictions of a sportive context.

Much of what we know of Ringen fighting styles is from Fechtbuch illustrations, such as the Goliatch Fechtbuch (c. early 16th century AD). This book shows that a readied Kampfringer fighter would stand with his feet a little closer than shoulder width apart and rotated outward slightly. His knees would be slightly bent and he would lean forward at the waist. His arms would be bent at 90 degrees with the palms of his hands facing each other. As he approached his opponent, he would raise his hands to chest level with his palms facing forward, ready to strike or grab him.

It is likely that Geselliges Ringen fighters started from a grappling position, and many illustrations show different positions that may have used for this purpose. The most common was likely a double shoulder grab, in which each opponent would grab the shoulders of the other before beginning the match. Their arms could be inside and outside or alternate. The variety of such positions depicted in these Fechtbuchs suggests the starting position was subject to local adaptations.