Skip to content
Health Ahoy may earn commissions on purchases from this page.
Irish Coraíocht (Collar and Elbow) 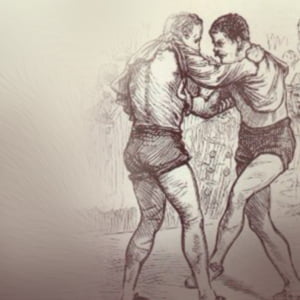 Coraíocht, commonly referred to as “Collar and Elbow,” is an Irish grappling sport with a history stretching over 2,500 years. Historically, it was a technical sport requiring more agility and leverage than brute strength, though some of the latter was naturally necessary. Its popularity in Irish culture led to its migration to the United States during the 18th century where it picked up quite a following, arguably becoming the most widely-practiced form of grappling at the time.

The sport can’t be categorized as strictly grappling or wrestling, as its history is filled with variants that align with each. For example, coraíocht was more like wrestling during the 17th century, as the opponent had to be pinned for up to five seconds to win. During the 19th century, it would have been more comparable to grappling, as the athlete only had to score a fall on the opponent, touching his back to the ground to secure victory. This is detailed under Objective further down.

Coraíocht competitions likely took place in the Irish Tailteann Games, which have a history as far back as the 7th century BC. Though its history for the following two millennia is scarcely recorded, the sport began to surge in popularity in Ireland again in the 17th century AD. During this period, coraíocht became an eminent spectator sport, even reaching the point that most successful wrestlers could earn their entire living from it. Its popularity there eventually led to its dissemination to the United States in the 18th century via Irish immigrants, where it quickly picked up a wide following.

The goal of collar and elbow was to score a certain number of falls – typically three – by pinning the opponent at three or four points (the four points being the shoulders and hips) for up to five seconds, depending on the variation. During the sport’s formalization in 17th century Ireland, the standard was a four-point pin for five seconds, akin to pins in wrestling. Sometime in the 19th century, the three-point touch became the norm, more similar to grappling. In this variant, if one of the competitors was taken down without a fall being scored, the referee would either call for a break of up to ten minutes or for the immediate setup of the next round.

Competitors had to wear a tight-fitting jacket and remove their footwear. As collar and elbow matches were akin to grappling and wrestling, most strikes were not allowed. Kicks to the lower body were the exception, as they were commonly used for sweeps or takedowns. Biting, scratching, strangling, head butting, and the like were not allowed. Violators would be penalized a point/fall or disqualified from the match.

The two opponents would stand upright, face each other, and grab the other’s inner elbow and collar with their left and right hands, respectively – thus the name “collar and elbow.” If this grip was broken, another grip could be made anywhere else. The two opponents would circle each other and attempt to take the other down via kicks, trips, sweeps, and throws. When one or both of the competitors hit the ground, the round would end and a fall would be awarded as appropriate (19th century), or the two of them would continue to wrestle until someone scored a pin (17th century).

There is no evidence of any sort of coraíocht league in 17th century Ireland. Matches among common practitioners were initiated by a challenge, and matches among more widely known athletes were likely arranged and advertised individually. Though there were no grand athletic festivals like ancient Greece’s Olympic Games, it is possible that tournaments with many athletes were arranged.