Skip to content
Health Ahoy may earn commissions on purchases from this page.
Greek Halteres 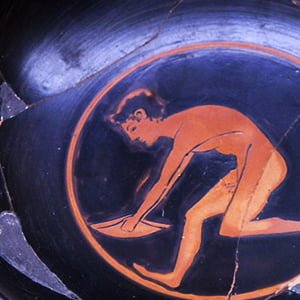 Halteres were ancient Greek sporting tools with apparent similarities to the modern dumbbell. They were oblong stones with a handle carved in for gripping, hewn down to a manageable shape for sporting use. They were crafted in a variety different weights, making them viable tools for weightlifting and progressive resistance training within ancient Greek culture, though they were primarily used for the long jump within the Greek pentathlon.

Their primary use within ancient Greek culture was as an assistive momentum tool for the long jump, part of the pentathlon, which was featured at three of the four Panhellenic festivals; the ancient Olympic Games, Nemean Games, and Pythian Games. Athletes would hold one in each hand and swing them forward during the launch of the jump to gain more momentum, then quickly throw them backwards while in the air for a little extra push after the peak. The uppermost athlete in the below illustration demonstrates the ideal form at the peak of the long jump, along with the halteres positioning at that moment.