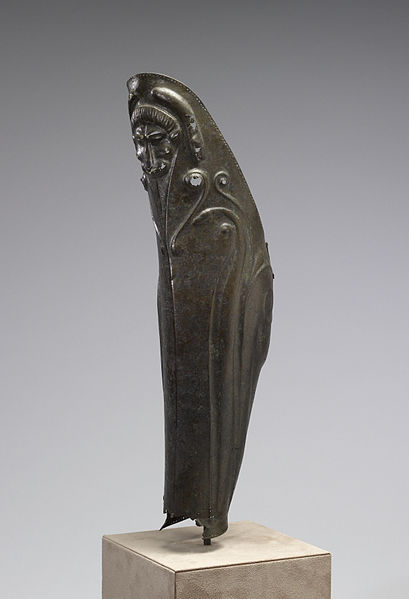 A photograph displays an angled view of a bronze hoplite greave. This piece of armor has been impressed with creases and other decorative features, including the image of a lion’s head on the knee.

This bronze greave is an example of one of the staple pieces of armor for the ancient Greek hoplite. These citizen-soldiers would typically own a breastplate, helmet, a pair of greaves, and a sword or spear. The ornate decoration on this piece hints at the wealth of its original owner.

Hoplite greaves such as this one were one of the pieces of armor worn by athletes competing in the hoplitodromos, an event featured at the Olympic Games and other Panhellenic festivals. In this event, competitors would don a helmet, shield, and (until the 5th century BC) greaves and sprint the distance of the stadium track.