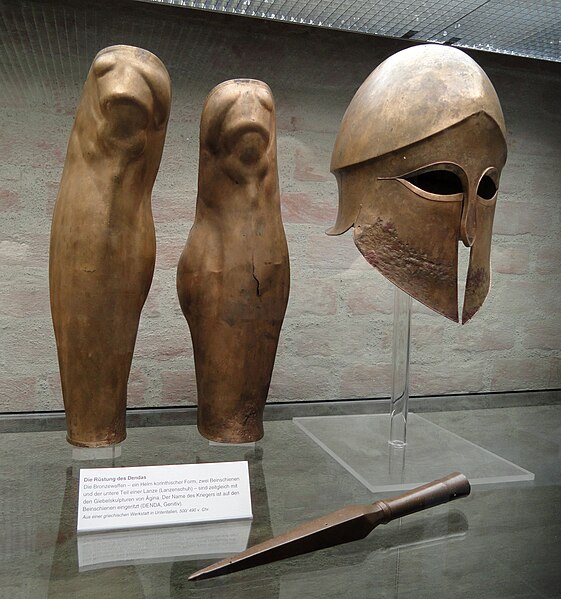 A photograph shows an ancient pair of greaves, a helmet, and a spearhead, all made of bronze. The helmet is designed to cover the face, leaving holes for the eyes and a vertical slit for the mouth.

These pieces of Corinthian armor, dating to approximately 500 BC, were discovered in a tomb located in modern-day South Italy. The warrior’s name, Denda, is inscribed on the left greave.

Pieces of hoplite armor like these were used in an ancient Greek athletic event called hoplitodromos, featured in the ancient Olympic Games and other Panhellenic festivals. Competitors would don a helmet, shield, and a pair of greaves and sprint the length of the stadion track (though the greaves were removed from the event in the 5th century BC).

This helmet was likely never used in the hoplitodromos, as most ancient illustrations of the sport depict helmets with more exposed faces.

At the time of photograph, these artifacts were housed in the Staatliche Antikensammlungen (State Collections of Antiquities) in Munich, Germany.