Skip to content
Health Ahoy may earn commissions on purchases from this page.
Greek Dolichos (Race) 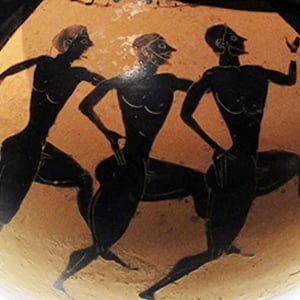 The dolichos was an ancient Greek footrace held at three of the four Panhellenic festivals; the ancient Olympic Games, Pythian Games, and Nemean Games. It was a distance race of 18-24 laps on the stadion track (The number of laps seems to have varied among the different Panhellenic games.) This was the longest footrace to hold a prominent place within Greek athletic festivals.

Based on accounts of the race from the Greek philosopher Philostratus (c. 172–250 AD), the dolichos was not as intense as one might imagine. He reports that competitors would move only a little faster than walking speed, and that they carried their hands out in front of themselves without much arm pumping. Only at the end the race, according to his account, would they pick up speed, sprinting to the finish. Granted, this account took place over 900 years after the competition was first featured in the ancient Olympic Games, so it may not accurately reflect the athletes’ behavior for the majority of the event’s history.

The dolichos was added to the ancient Olympic Games in 720 BC. It was the third footrace to be added to the games, preceded by the stadion and diaulos and preceding only the hoplitodromos. It was not a central event by any means, and served more as background entertainment for the spectators. The stadion, in contrast, was considered the main event at the ancient Olympic Games.

The sport continued to be a featured in the Olympic Games until their abolition in 394 AD under emperor Theodosius I. In the decades following his decree, all of the Panhellenic festivals slowly died out.

The dolichos took place on a track called the stadion, located within the stadium. The length of track was defined as 600 Greek feet (pous), though since this unit was not standardized, the stadion could vary in length by up to 150 feet. Measurements at archaeological sites vary in length from 177 m (581 feet) in length at Delphi to 225 m (738 feet) at Aphrodisias.

Partially because the length of the race varied among the different Panhellenic festivals, the exact number of laps in the dolichos is unclear, though it was likely between 18 and 24. With this in mind, and accounting for the variation in the stadion length among different stadiums, this race was likely between 3,186 m (10,453 feet) and 5,400 m (17,717 feet). That would make the dolichos a little under 3 miles on average.

The athletes would line up at the beginning of the track, nude and barefoot, and take off at the signal of a nearby judge. They would run back and forth on the stadion to complete the required distance, looping around a pole called a kampter at the finish line each lap. (It is unclear whether each competitor had his own kampter to loop around or if all competitors looped around the same kampter.) The first runner to complete the required number of laps won the title.