Skip to content
Health Ahoy may earn commissions on purchases from this page.
Ancient Egyptian Medicine 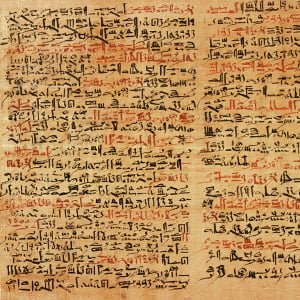 Ancient Egyptian medicine is a term that refers to healthcare practices and beliefs in ancient Egyptian culture. Healthcare in ancient Egypt appears to have had a primary focus on herbology and mysticism, though certain practices were arguably more advanced than those in comparable societies from the same period. Ancient papyrus scripts provide insight on the types of treatments physicians used, including crude surgeries, medicinal prescriptions, and magical incantations. In addition, several of these manuscripts reveal elementary knowledge of human anatomy, likely discovered through dissections and mummification processes. However, while many of these practices demonstrate a surprising amount of medical knowledge, a lot of Egyptian medicine and healthcare was rooted in supernaturalism.

The abundance of papyrus texts that detail magical incantations and prayers suggests that supernatural explanations and treatment may have been more common than the natural. The majority of Egyptian medical texts available today host a large number of magical incantations for specific medical treatments. Even so, their advances in natural causation and treatment were effective enough for Greek figures such as Hippocrates (460–370 BC) and Galen (129–216 AD) to study Egyptian medicine, contributing to the development of Greek healthcare.

As ancient Egyptian medicine involved both natural and supernatural diagnoses and treatments, physicians were a sort of combination between doctors and priests (not unlike medicine men in Native American healthcare). Additionally, Egyptian physicians could fill roles in specialized fields such as gastroenterology, ophthalmology, and dentistry. It seems, however, that the average physician was versed in wound care, medicinal prescriptions, and magic.

Papyrus scripts from ancient Egyptian physicians illustrate a fairly sophisticate approach to wound care for the time period, though some such practices are understood today as ineffective or harmful. Open wounds were often treated with balms made of combinations of honey, willow leaves, acacia seeds, and other herbs. For bleeding wounds, the Egyptian physician might apply raw meat, saw dust, animal fat, or dung.

A myriad of medical tools from archaeological findings suggest ancient Egypt was familiar with noninvasive surgery. Forceps, bone saws, scalpels, and the like, in tandem with information from papyrus documents, provide evidence of surgeries including limb amputation, bone setting, and basic dentistry. Egyptian physicians appear to have been somewhat versed in cauterization of wounds as well.

Several papyrus texts list specific medicinal prescriptions for different ailments. Laxatives, soothing salves, and contraceptives were all represented in the ancient Egyptian healer’s repertoire. Various materials used in their prescriptions were considered to have specific properties, suggesting not all prescriptions were guesswork. For example, henna was thought to aid hair growth, cumin was thought to inhibit flatulence, and castor oil was thought to help with constipation. While some of these assumptions have been proven accurate, the vast majority are currently regarded as not useful or potentially harmful. For example, animal dung was sometimes used in treatment of open wounds, as mentioned above.

As ancient Egyptian culture attributed the causes of certain ailments with the doings of evil gods and demons, Egyptian medicine revolved heavily around magic and spiritualism. Before treatment, the priest physician would offer a prayer to one of the gods. During the treatment, incantations would be recited in an effort to ward off evil spirits. To augment treatment, the healer would sometimes wear a symbolic talisman intended to harness the spirit of whatever animal or god it represented.

These spiritual treatments within ancient Egyptian medicine likely had a strong placebo effect, creating a false sense of efficacy. It’s arguable that this was actually beneficial, as the placebo effect can lead to surprisingly strong physiological benefits. Were the physician presented with an otherwise hopeless case, they could employ what they considered to be powerful magic as a last resort, possibly triggering a placebo effect strong enough to make a measurable improvement in the patient. As such, despite the flawed logic of such treatments, they may have had some use.

Halioua, B., & Ziskind, B. (2005). Medicine in the days of the pharaohs. Cambridge, MA: Belknap Press of Harvard University Press.

Saunders, J. B. (1963). The transitions from ancient Egyptian to Greek medicine. Lawrence: Univ. of Kansas Press.