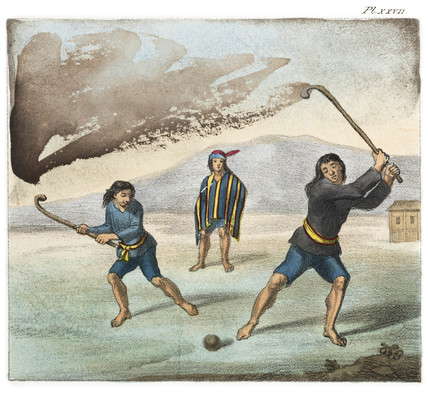 A color illustration depicts three people playing a ball game involving curved sticks. The two players in the foreground hold their sticks high, ready to strike the ball resting on the ground between them. The third person watching from the center background contrasts the others, as he doesn’t wield stick and wears different clothes. The two players wear a yellow belt over plain clothes, while the person in the background wears a striped poncho and a headdress with one feather.

This illustration, depicting a hockey-like game, is pulled from Travels Into Chile, Over The Andes, In The Years 1820 And 1821, published in 1824. It is attributed to the Araucano people, an out-of-use term for the Mapuche people in regions of modern Chile and Argentina. As the only hockey sport played by the Mapuche people today is the sport chueca, it is likely this illustration depicts this sport or a predecessor of it.