Skip to content
Health Ahoy may earn commissions on purchases from this page.
Japanese Sumo Wrestling 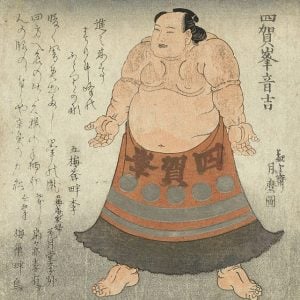 Sumo wrestling is a Japanese grappling sport with a recorded history reaching back about 400 years. Beginning in the 18th century, sumo wrestling was transformed from a street fighting sport into a cultural phenomenon, largely due to the efforts of sumo referee Yoshida Zenzaemon. Legends surrounding this cultural sport claim that it has been practiced for over a thousand years, though this is inaccurate, as discussed under Origins and History further down.

In modern sumo wrestling, the two wrestlers meet in a ring and try to force each other out of bounds or to the ground. The early version of the sport, sechie sumo, differed primarily in that the only goal was to throw the opponent. As these were typically street matches that took place in the clearing of a crowd, forcing the opponent out of bounds wasn’t an option.

Sumo wrestling’s ties with other sports and traditions are somewhat muddled. Sechie sumo is thought to have developed into a street fighting sport out of another Japanese martial art, perhaps jujutsu, during the 17th century. As jujutsu was developed out of a combination of Japanese martial arts, it may be possible that sumo wrestling’s prehistory could be traced back to the development of karate and, even earlier, kung fu. This amalgamation of martial arts led to the creation of sechie sumo, which was mixed with traditions of the Shinto religion in an attempt to culturally appropriate the sport, as detailed below.

The history and origins of sumo wrestling are often conflated with inaccurate legends. Claims regarding the sport’s history are controversial, as many sources cite legends of this sport’s practice stretching back beyond a thousand years ago. This has come about due to a dual-history nature of the sport – that is, two separate practices, each with its history, that were combined in the 18th century to form a new sport.

Sumo wrestling in its modern form began to develop during the 18th century. At the time, sechie sumo more closely resembled grappling or a form of martial arts, wherein the goal was to throw the opponent to the ground. (In fact, sechie sumo had developed out of another martial art, likely jujutsu, within the previous 200 years.) This is slightly different from the modern sport, in which the goal is to throw the opponent or push them out of a ring. This ring was a later development as well, as sechie sumo during this period was typically practiced in a small clearing in the midst of spectators.

The muddying of the sport’s history can be traced directly back to Yoshida Zenzaemon, an 18th century sumo referee. He adapted much of the sport to incorporate traditions of the Shinto religion in an effort to transform it into an official cultural practice. To aid this, he crafted a verifiably false history of the sport that tied it into Shinto rituals stretching back hundreds of years, appealing to a desire to maintain a supposed cultural heritage. By doing so, Japanese officials were more likely to accept the practice of the sport as such. Zenzaemon found success in this strategy, and his newly transformed sport and its concocted history were quickly adopted by Japanese society.

As such, the claim that the practice of sumo wrestling stretches back long before to the 18th century is unsupported. Ancient texts that are often cited as evidence of the sport do not use the term “sumo,” and those that do use the term do not describe the activity it refers to. Some verifiable references to sechie sumo can be found shortly prior to the 18th century, though this was during its developmental period.

In modern sumo wrestling, the goal is to force the opponent out of the ring or force them to touch the ground with anything except the bottoms of their feet. These wrestlers can make use of a variety of fighting styles to best suit their strengths, focusing on their agility or their raw muscular power, for example. To start these matches, the wrestlers position themselves on lines set about 30 inches apart in the center of the ring. When the match starts, the two clash into each other. As these rings are fairly small (a little under 15 feet in diameter), these bouts are typically quite short.

In 18th century sechie sumo, the goal appears to have only been to throw the opponent to the ground. The fact that the ring was formed by spectators would preclude forcing an opponent out of the clearing. It is unclear whether this sport featured any sort of ritual to start off the match like its modern counterpart does, though since it was a form of street fighting, it was likely fairly unregulated.