A photograph displays an ancient wooden model of Egyptians working in a kitchen. They can be seen grinding emmer or barley, with an oven nearby for bread and a pot for brewing beer.

This ancient wooden model provides a glimpse of Egyptian food preparation 4,000 years ago. The two men on the right can be seen grinding grain, likely emmer or barley. Barley beer was especially popular in ancient Egypt, and the pot sitting next to the middle worker would suggest such a beer is being brewed here. The woman on the left is reaching toward an upright oven, used to cook barley and emmer bread.

At the time of photograph, this model was housed in the Egyptian Museum of Berlin. 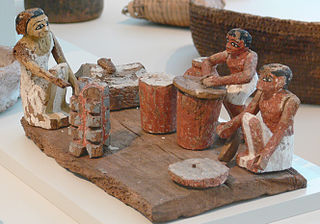