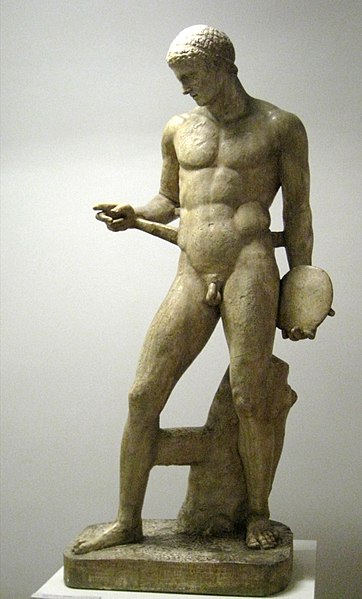 A photograph shows a sculpture cast of a nude athlete in front of a grey backdrop. The athlete holds a discus in his left hand, though he appears to be at rest. His musculature is well-defined and exaggerated. The cast has been given an aged, weathered look with a green hue.

This is a cast of one version of Discophoros, a series of Roman marble copies of a Greek bronze work thought to originate from the 4th century BC. Several Roman copies of the statue have been discovered, the oldest of which, though missing its head and all four limbs, dates to the 2nd century AD. Later copies include more of the limbs and the discus, allowing modern reproductions to be more detailed. The range of Roman copies and modern copies of the statue, many of which take some liberty with its form, have led to quite a number of variations of the work. Other variations are linked below.

The athlete holds in his left hand a Greek discus, which was used in the discus throw. This was one of the five sections of the pentathlon, an event featured in the ancient Olympic Games and other Panhellenic festivals.

At the time of photograph, this work was housed in the Pushkin Museum of Fine Arts in Moscow, Russia. 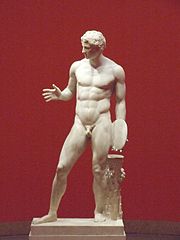