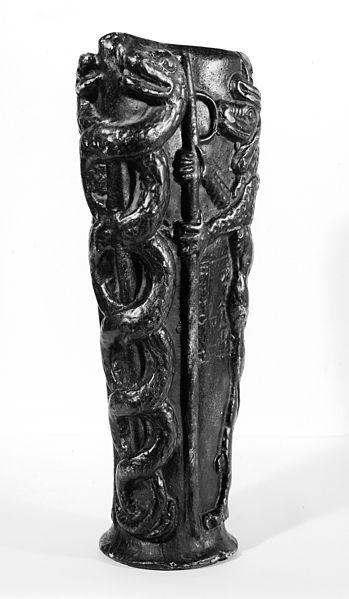 A black and white photograph displays a black plaster cast of an ancient Babylonian oil beaker.  Its face features a relief of two snakes entwined around a rod with two unidentified winged creatures, one on each side of the snakes, standing nearby.

The side of the beaker bears a relief of two snakes entwined around a rod, a symbol with similarities to those that would later come into use in Greek culture. In ancient Greece, the mythological deity Asclepius, associated with medicine and healing, wielded a rod with a snake wrapped around it. (This is not to be confused with the staff carried by Hermes, called the caduceus, which was entwined by two snakes and has in modern times become mistakenly associated with healthcare.) It is possible the Babylonian symbol here has some connection with the development of Asclepius and his rod and their connection with healthcare.