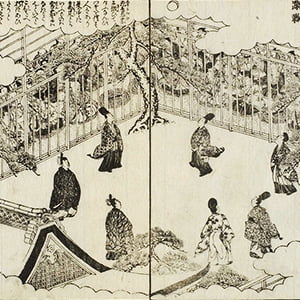 Kemari was a Japanese keep-up game played primarily during the Middle Ages. In this game, players positioned in a dirt court took turns kicking a light, delicate ball into the air, attempting to keep it from touching the ground. The basic concept of the game is similar to that of “hacky-sack,” or the Australian Aboriginal game woggabaliri. Though modern Japanese texts on kemari have often attributed its origins to ancient China, no historical evidence actually suggests a link between the two. As such, kemari appears to be a wholly Japanese game in origin.

Several Middle Age texts go into great detail on the game, allowing us to piece together the rules in their entirety (or nearly so). Though kemari is sometimes alluded to in modern materials discussing the history of soccer, the aforementioned Middle Age treatises make it clear that kemari was not similar to soccer. In addition, the development of modern soccer was limited to Europe during and after the late Middle Ages, and as such it is highly improbable that kemari had any real influence on the process. It is notable, though coincidental, that juggling a soccer ball among several players bears similarity to the basics of kemari.

Kemari was enjoyed among all classes in Japanese society for several centuries. Treatises on the game reveal that both nobility and peasants enjoyed playing it to a great extent. Members of nobility often reserved spaces in their courtyards to make room for kemari courts, which were recognizable by their signature four trees, one planted in each corner of the court. Members of the lower classes made their own courts as well, though the use of certain kinds of trees was restricted to the nobility only, as detailed under Symbolism and Ranking further down.

The earliest literary reference to kemari lies in the Nihongi, a chronicle of Japanese history written during the late 7th and early 8th centuries AD. Other texts focused specifically on the sport date from the 12th century AD. Some modern texts claim that kemari was played in China as early as the 5th century BC, however none of the original treatises suggest so, and no such sport has been found in Chinese history within that timeframe. A form of Chinese cuju called baida may be misconstrued as being similar to kemari, however baida wasn’t played until approximately the 7th century AD.

The goal of kemari was to keep a light ball airborne, much like modern footbag, or “hacky sack.” However, one primary element gives this game a much different twist; the use of trees. Kemari was played in a square dirt court, about 20 feet in length and width, with one tree positioned at each corner. While the ball could simply be kicked from one player to another, it could also be kicked into one of the trees. These trees were pruned in such a way that the ball would not get stuck, but rather would fall through the branches, bouncing off of them unpredictably. The closest player would attempt to intercept the ball before it hit the ground to keep it in play.

Each game typically had 8 players. For the beginning of the match, they would pair off to each corner, with each pair positioned on opposite sides of their tree. Certain players were delegated to certain corners based on rank, explained under Symbolism and Ranking further down. The player with the highest rank in the court would start the game by kicking the ball to the player with the next highest, after which players could move freely. In a normal game, this continued indefinitely until the ball hit the ground, at which point the players would reset to their original positions to prepare for the next round.

Kemari usually continued indefinitely with no real winners or losers, though a scoring system was implemented for competitions. In such a setting, each kick of the ball would be counted by a judge, continuing until the ball hit the ground or the team reached a predetermined count limit (usually ranging from 120 to 1,000). Each team would be given three attempts, and the team with the highest score at the end of the competition won.

Many aspects of kemari had symbolic significance. Perhaps most notable of these was the use of different kinds of trees used for the court: plum, cherry, willow, maple, and pine. Plum trees were used only by the lower classes when other kinds weren’t available. Pine trees carried the most symbolic significance, though the use of pine in all four corners of the court was reserved for royalty. In courts with only one pine tree, the player with the highest rank would begin the game positioned by it.

The balls used for the game had symbolic significance as well. They could be decorated with one of two different processes, as detailed under Equipment further down, with each symbolizing the sun and moon.

The ball used in kemari was a little under 8 inches in diameter – about 10% smaller than a standard soccer ball. This ball was made of deerskin and was hollow inside, weighing only 3 or 4 ounces. As such, it was not incredibly robust and could break under the stress of a reckless kick. The ball would typically undergo one of two coloring processes, each meant to represent a heavenly body. Some balls would be covered in a type of egg white glue and lightly roasted over a pine-needle fire, producing a yellowish tint meant to symbolize the sun. Others would be coated in a layer of glue and white makeup to symbolize the moon. The differences between these balls were purely cosmetic and symbolic – they did not change the style of play.