Skip to content
Health Ahoy may earn commissions on purchases from this page.
Ancient Roman Nutrition 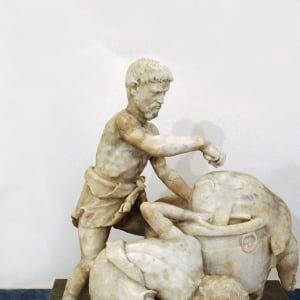 Nutrition in ancient Rome resembled Greek nutrition to a high degree, largely due to the heavy influence of Greek culture and availability of similar food products in the Mediterranean region. Similar to Greek diets, ancient Roman nutrition revolved heavily around wheat, barley, olives, cheese, fruit, legumes, and vegetables. Unlike the Greeks, however, larger nutritional variance could be found between upper and lower classes as the wealthy developed more and more hedonistic lifestyles throughout the life of the empire.

Much like within Greek nutrition, bread was one of the most common elements at the Roman table. These loaves were typically made of barley, though wheat could be used as well, and flavored with spices or cheese. In addition to bread, these grains could be used to make puls, a staple gruel that was similarly favored with seasonings, cheese, or olive oil.

Next to bread, vegetables and legumes were likely eaten most frequently. Olives, broccoli, asparagus, celery, onions, and leeks were all featured in various dishes from soups to sides. Legume soups made from chickpeas or fava beans were not uncommon, though the wealthy preferred to use lentils. Sweet fruits, such as grapes, pears, figs, and apples, were especially popular among the wealthy, and were eaten both as side dishes and as snacks during social drinking.

Pork was a staple of ancient Roman nutrition, though the poor didn’t consume as much meat as the upper classes did on average. The wealthy enjoyed an abundance of pork, fowl, and dormice, and had limited access to beef. Seafood, including mollusks, shrimp, tuna, and mullet, was popular among the wealthy as well. Fresh catches were often used in production of a salty fish sauce, a popular condiment for use in both cooking and dipping.

Within ancient Roman nutrition, cheese was enjoyed among all classes, though more so among the poor. Similar to Greek custom, it would often be baked into bread or used to flavor grain-based meals, such as the aforementioned puls. Unlike the Greeks, the Romans did not have any negative sentiments toward drinking milk; it was fairly commonplace among the wealthy.

Wine was a staple drink in the Roman diet, and would have served as an excellent source of antioxidants. Much like within Greek culture, the Romans diluted their wine with water before drinking, which reduced the risk of alcoholic overconsumption. An abundance of historical texts make it clear that it was considered barbaric to drink wine undiluted in Greco-Roman culture, covered in more detail here. However, it is likely that the lavish lifestyles of Roman nobility led to an increased risk of alcoholic overconsumption, despite its dilution. The lower classes likely benefited from moderate wine consumption, with little risk of overconsumption.

The Roman lower classes likely had fairly healthy diets by today’s standards. Malnutrition was not a major concern, though low wages may have led to an overrepresentation of grain-based foods due to their low cost.

The wealthy, though rich enough to afford a wide variety of whole foods, may not have had very good diets. Senaca reported that while feasting, members of nobility would often gorge themselves then purposefully vomit to make room for more food. This combination of hedonistic lifestyles, affinity for sweets and other low nutrient-density foods, potential for alcoholic overconsumption, and gluttony likely led to a caloric surplus.

With these things in mind, average members of the upper-lower class and lower-middle class were likely the healthiest individuals, as their economic status would discourage lavish, gluttonous lifestyles and encourage consumption of a wide variety of whole foods.

Due to higher meat consumption and use of olive oil, fish sauce, and dairy among the wealthy, macronutrient intake among the upper class was likely around 25-35% carbohydrates, 25-35% protein, and 30-40% fats, with a high chance of caloric overconsumption. Due to the high consumption of grain products and moderate consumption of pork among the lower classes, it is safe to estimate the macronutrient caloric ratio for the upper-lower to lower-middle class Roman citizen was around 35-45% carbohydrates, 20-30% proteins, and 20-35% fats.

Listed below are some foods that would have been commonly found in the ancient Roman citizen’s diet, organized roughly by food group.